Educating on the frontline of a crisis 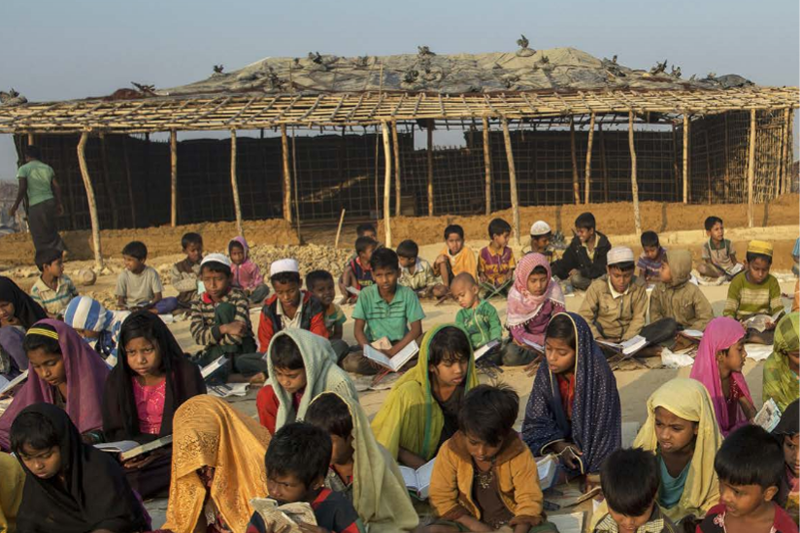 For millions of young refugees and migrants around the world, the provision of good teaching is critical to their recovery from displacement and trauma.

There is a desperate need for teachers to be given autonomy and support in educating the groundswell of refugee and migrant students around the world, says the global teacher union federation, Education International (EI).

The prospect of walking into a classroom to teach more than 100 children is tough enough. Now picture that classroom being a tent in a hot, dusty, noisy refugee camp. The children are hungry, they may speak several different languages or dialects, and they may be illiterate. There are no desks and few resources.

Yet, thousands of teachers around the world are doing their best in these types of conditions on a daily basis.

This experience needs to be taken into account when it comes to working out policies for educating refugee and migrant children, and educators and their unions should be given centre stage in the process, says EI general secretary David Edwards.

“Educators and school staff are on the frontlines of the so-called refugee crisis,” he says. “They are dealing daily with the mental and physical challenges of educating children affected by migration and displacement, and they are developing on-the-spot solutions.”

Edwards says his visits to teachers working in vast refugee camps in northern Kenya and northern Uganda have been “mind-blowing”. In Lebanon, he talked to teachers running double shifts in schools to try to cater for the numbers of students flooding in.

“I visited a school for refugees in Beirut where the children suffer from huge trauma and have a lot of needs. But the teachers don’t have the resources they need, and they don’t get paid on time and have to go on strike repeatedly.”

Worldwide, the number of migrant and refugee school-age children has grown by 26 per cent since 2000 and could fill half a million classrooms, says UNESCO’s 2019 Global Education Monitoring report.

The situation is even worse in developing countries, which are hosting 92 per cent of the world’s
school-age refugees.

Amid a dire shortage of political will and funds to build classrooms, hundreds of thousands of well-trained teachers are needed, backed by appropriate support and resources.

UNESCO estimates that Germany would need 42,000 new teachers, Turkey 80,000 and Uganda 7,000 to provide quality education to the refugees they are hosting.

EI has been working with teachers and school communities to develop training for educators, classroom activities and school-wide approaches to inclusion. It launched a toolkit late last year to expand support for educators, interactive training will be introduced shortly, and it plans to create workshop-delivered training modules.

“We want unions and teachers around the world to brainstorm and explore solutions that best fit their local context, reflecting on what others have been doing, the lessons they’ve learnt and the expertise they’ve developed,” says Edwards.

The dearth of teachers and resources has created an opportunity for private operators to step into the breach. For example, a 2017 EI study found there had been a surge of private sector involvement in the Middle East since 2015.

The private players tend to argue that the scale of the problem requires a technology solution, says Edwards.

“Instead of investing in teachers and resources on the ground, their solution is to hand iPads to a bunch of refugees in a tent who are ‘taught’ online by a teacher sitting in a comfortable living room in an industrialised country.

“We have to make sure the opportunists don’t short-change these kids out of their rights. You can’t reduce a school to iPad instruction and say a child is somehow getting a quality education. That’s absurd.”

EI is focused on safeguarding education from the profiteers in these countries by working with local unions, which keep an eye on any moves towards privatisation, Edwards says.

Sowing the seeds of hope and survival

Refugee and migrant students who make it to Australia benefit from a wealth of ongoing research and rich approaches to teaching those from other countries.

Beverly Hills Intensive English Centre in Sydney has a speedy turnover of students – but that’s a good thing.

The public school’s job is to teach enough English for the students to survive in a regular high school. It means students might stay for as little as one term, and sometimes a few terms more, depending on their level of need.

It might not seem much time for EALD (English as another language or dialect) students to pick up the language, but deputy principal Michael Harmey says most students advance quickly.

“You see really wonderful young people who can make incredible progress due to their efforts and resilience. They thrive on encouragement and some specialised teaching,” he says.

Enrolment at Beverly Hills, one of 14 Intensive English Centres in NSW, fluctuates between 110 and 250 students, from between 20 to 30 language backgrounds.

The school is supported by academics from two universities who provide evidence-backed approaches to teaching EALD students and also research ways of improving progress.

“We have various projects with universities to look at language learning and pedagogical matters. But the really important thing we can do at a school like this is to give the students the tools make them self-sufficient in learning in English when they go to high school,” says Harmey.

Of course, refugee and migrant students often need more than language training. Many arrive with medical conditions that can hinder their progress, so the school works closely with South Eastern Sydney Local Health District, including the Refugee Health Service, and employs a nurse who screens new students.

The program encompasses preventative physical and mental health measures and launched a research project to study the development of obesity among students and find ways to change patterns of behaviour.

A project that encourages mindfulness practice among Arab speakers is also underway, with the help of the local health service.

“Mindfulness is not a common approach among Arabic-speaking refugee people, but it can have a positive impact on the way they deal with trauma and other issues,” says Harmey.

Beverly Hills also employs a full-time counsellor and multilingual learning support officers. Classes are limited to 18 students and can be as small as 10 for those with special needs or no literacy in their first language.

“We’re quite generously staffed with teachers and learning support officers. It’s a very good model and we get outstanding progression for the students in the short time we have them.

“I’ve just graduated an 18-year-old boy who had been running a shop in a refugee camp since he was seven because his father damaged his back in a car accident and couldn’t work. The boy had no education in Arabic and when he left here he was able to very coherently address an audience about his experience as a refugee, and he could read and write in English. He’s gone off to a high school with hopes for his future.”

UNHCR’s Turn the Tide: Refugee Education in Crisis tells the stories of some of the
7.4 million refugee children of school age

This article first appeared in the Australian Educator Autumn 2019.