So Much for “Competent Economic Management” 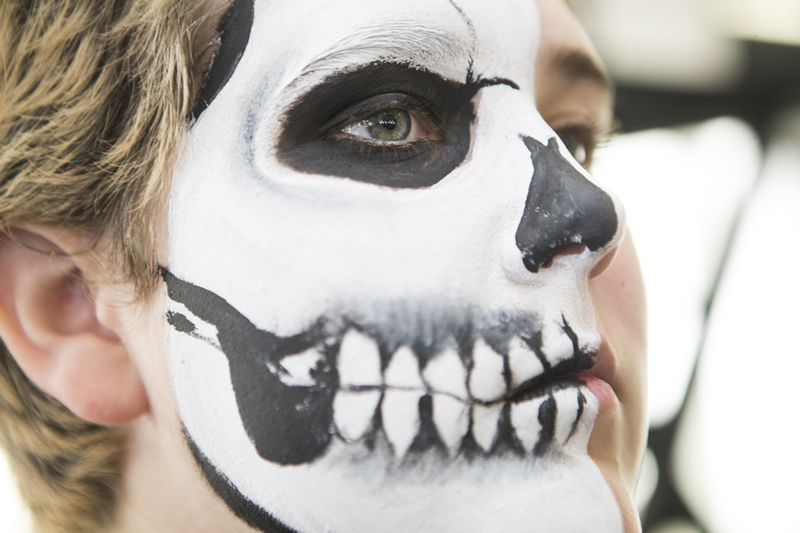 Australia has been through another hard-fought federal election, in which public debate focused predictably on which party are the “best economic managers.”

Of course, the economy is very important. And government is important to the economy. But the underlying assumption that elected politicians “manage” the economy, and actually create all the jobs, is very odd.

After all, Australia is primarily a market economy. About 85% of all our output of goods and services – our GDP – is produced by private businesses.

Only about 15% is produced by government itself … and government –funded agencies (like schools, TAFEs, and hospitals). That 15% is very important. We need more of those public services. They are growing. They’re crucial to our quality of life. And they’ve created hundreds of thousands of new jobs in recent years.

But that’s not what commentators usually mean when they evaluate political parties ability to “manage the economy.” Usually, they want government to spend less on public services: to be disciplined, to be tight-fisted, to wrestle the deficit to the ground.

The Coalition’s Vision of “Economic Management”

It’s particularly incongruous when conservative politicians, like those leading the Coalition, boast about being good economic managers. Because most of the time, they say the economy shouldn’t be managed. Rather, in their view, it should be left to private businesses, and so-called “market forces”, to determine what happens. Government shouldn’t try to manage: it should just get out of the way.

After all, that’s the philosophy idea behind privatisation. Deregulation. Free trade agreements. Cutting “red tape.” The common idea is that government should keep its hands away from the levers of the economy. Because the private sector knows best.

That mindset, by the way, is what produced our current electricity system. Privatised Joblink services in perpetual chaos. Rivers with no water. False robo-debt claims mailed to tens of thousands of Centrelink clients. And more. That’s the private sector in action.

Sadly, there is no better example of the irrationality and waste of private sector management than Australia’s vocational education system, which has been decimated by years of profit-driven rorts, scams, and outright corruption. The decision to hand over vocational training to dodgy fly-by-night private colleges, subsidised with enormous sums of public money, has left Australia’s once-vaunted VET system in tatters. Yet since this was part of government downsizing, conservatives still see this as some kind of “achievement.”

Is Australia’s Economy Strong … or Weak?

Set aside for now that philosophical question of whether governments – especially conservative governments – actually manage the economy. Let’s now review how well Australia’s economy has actually been performing.

The current government boasts that it created over a million jobs over the past five years. But in fact, the only jobs the Commonwealth government itself creates are those in the federal public service. And there were 10,000 fewer of those in 2018 than five years earlier. Budget cuts and outsourcing reduced the number of federal public servants, despite Australia’s growing population and growing demands for service. By that measure, the Commonwealth government didn’t create jobs at all: it eliminated them.

Yet even as it downsized its own staff, the government took credit for “creating” all the other jobs in the economy. And there were indeed 1.1 million net new jobs created between 2013 and 2018. Is that impressive? Not compared to the number of people who need those jobs.

There are over 20 million Australians of working age. And our population is growing quickly: by 1.75% per year over the last 5 years. During that time the working age population expanded by over 1.5 million – much more than the 1.1 million new jobs. So Australia actually needs to create at least a million jobs every 5 years, just to keep up with population, and prevent unemployment from rising. That’s a normal state of affairs – not some extraordinary triumph.

Focusing on the number of jobs misses an important issue: what kind of jobs were created? In fact, the quality of work (as opposed to the quantity) has been deteriorating steadily. Almost half the new jobs created over the past five years were part-time. As a result, today almost one-third of employed Australians work part-time – and many want more hours.

Other indicators of job quality have also gone downhill. Casual work has grown, as have temporary and labour-hire jobs. The number of people holding multiple jobs has reached a record. Centre for Future Work research has shown that insecure and precarious work is now so common in Australia, that less than half of employed Australians now hold a “traditional” job: full-time, permanent employment with normal entitlements (like sick pay and superannuation).

The Crisis in Wages

Wages are another crucial indicator of prosperity – and on that score, things have definitely gotten worse. In fact, since 2013 wage growth has fallen to the slowest sustained pace since the end of the Second World War, growing just 2% per year on average – about half as fast as usual.

Of course, it’s not just wages that go up. Prices go up, too. And wages have barely kept pace. That means real wages – that is, wages relative to consumer prices – have hardly changed at all. That’s a big change from previous periods, when Australian real wages increased quite steadily. 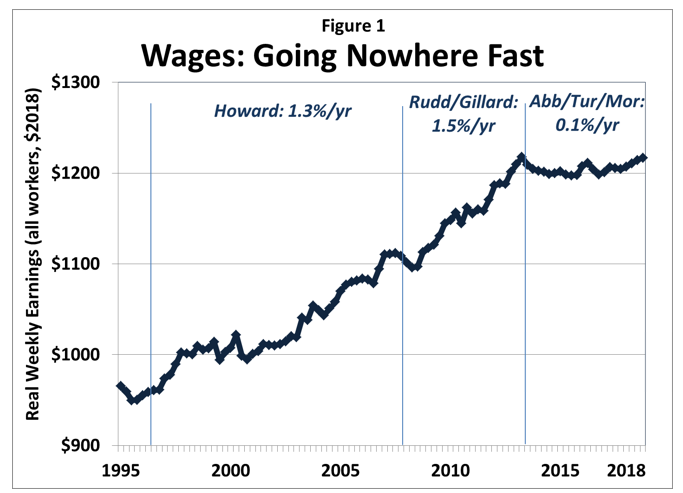 Since 2013, under the Coalition’s “competent economic management,” real weekly wages have been essentially frozen (see Figure 1). That compares to steady increases in real wages of 1.5% per year under the Rudd-Gillard government, and 1.3% per year under John Howard.

Does the Coalition’s “economic management” explain the weakness of wage growth over the last few years? Well, to a large extent it does. Because even though government doesn’t truly manage the economy, and doesn’t truly create jobs (other than jobs in government itself), it does set the rules under which wages are determined.

And several of the government’s policy measures have clearly contributed to wage suppression. These include a strict cap on wage gains for public sector workers, continued attacks on unions, endorsement of lower penalty rates for Sunday and holiday work, and others.

Many indicators suggest Australia’s economy is now heading into a very rough patch. Economic growth has slowed dramatically. Over the 12 months ending in the March quarter, the economy expanded by just 1.8 percent – the worst since 2009 (at the peak of the Global Financial Crisis). In per person terms, living standards are falling. 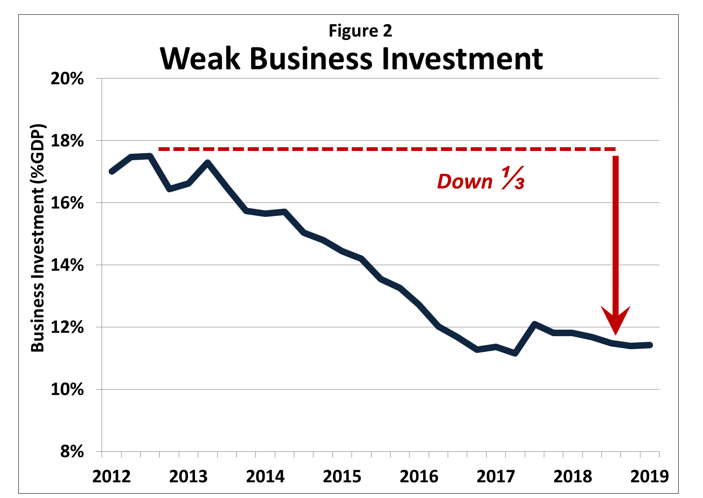 Another big problem has been weak investment. In theory, if the economy was truly managing itself (as conservatives believe), private business investment would be strong. But the last 6 years have been the worst for business investment since World War Two, despite a supposedly business-friendly government holding sway in Canberra. As illustrated in Figure 2, business capital spending has declined by one-third as a share of GDP since 2013 – and it’s not getting any better.

All in all, Australia’s economy is in pretty rough shape. That’s not solely because of the federal government. But it certainly played a role.

Accumulating evidence of a looming slowdown explains why, just two weeks after the election, the Reserve Bank of Australia cut its interest rates – to just 1.25% (the lowest level in history). And financial analysts are now unanimous that were will be at least one, and possibly two, more interest rate cuts this year, given the bad economic outlook.

The RBA should have cut rates before the election. But they didn’t – likely fearing the political controversy that would have ensured. Just imagine: if the economy was really being so “well-managed,” why would the RBA have to cut interest rates during an election campaign?

Unfortunately, cutting interest rates won’t do much to address the problem. The impact on consumers will be modest, because they are already carrying record debt. Personal debt in Australia now equals 200% of personal disposable income – the highest in history, and one of the worst in the world. So slightly lower interest rates cannot spur significant new spending: it’s like pushing on a string. If we really want to get the economy going again, we need a more direct and powerful boost to jobs and incomes: through expanded public services, big infrastructure investments, and higher wages.

The contrast between the self-proclaimed economic expertise of the Coalition, and the rapidly deteriorating economic reality faced by Australian workers, has rarely been clearer. The Coalition based its re-election campaign on unjustified boasts about the health of Australia’s economy under its stewardship – and a false but effective scare campaign that it would fall apart under Labor.

Union activists and other progressive campaigners need to start now to inoculate ourselves, and all voters, against this misleading and manipulative economic jargon in the future. That will require educating members and co-workers about how to truly judge whether the economy is working well or not: namely, by whether real Australians have access to decent work, healthy wages, secure jobs, and generous public services.

Conservatives don’t deserve their reputation as “good economic managers.” Tough times are now coming in Australia’s economy – and the resulting hardship will be a painful reminder that we need a new approach. Let’s make sure Australians learn the right lessons from the Coalition’s betrayed promises, so we can build support for a better, more inclusive and sustainable economy in the future.

By Jim Stanford, Economist and Director of the Centre for Future Work at the Australia Institute. A video presentation covering themes in this article is available on YouTube.

This article originally appeared in The Australian TAFE Teacher WInter 2019.