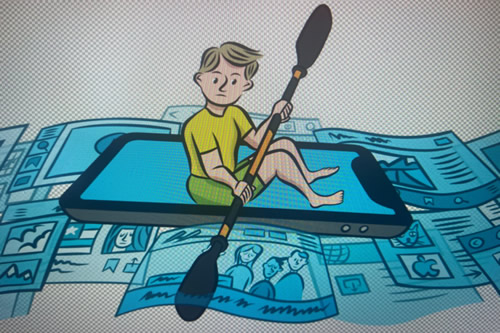 Until recently, the 2016 US Presidential campaign was the event most associated with fake news. That was until the world was gripped by a deadly pandemic.

This year social media has been flooded with conspiracy theories about the source of the coronavirus, half-baked medical advice, and false assertions about the virus-fighting capabilities of various pharmaceuticals.

It seems as though there is no area left untouched by disinformation in relation to the COVID-19 crisis, says Guy Berger, UNESCO’s policies and strategies director in communication and information. “In a time of high fears, uncertainties and unknowns, there is fertile ground for fabrications to flourish and grow. When disinformation is repeated and amplified, including by influential people, the grave danger is that information which is based on truth, ends up having only marginal impact,” he says.

Fake news is “made-up stuff, masterfully manipulated to look like credible journalistic reports that are easily spread online to large audiences willing to believe the fictions and spread the word,” says Politifact, the fact checking website run by the respected Poynter Institute in the US. “When we can’t agree on basic facts – or even that there are such things as facts – how do we talk to each other?” Politifact says.

Sorting out the truth

A 2017 survey by academics at Western Sydney University and Queensland University of Technology, found that only one-third of young people were confident they could distinguish real from fake news. The survey found 73 per cent of children aged eight to 16 regularly consumed the same news as their parents and 49 per cent got their news from social media sites, a figure that increases with age.

In an article in The Conversation in February, two of the survey’s authors, senior lecturer Tanya Notley and associate professor Michael Dezuanni, reported that more than two-thirds of children surveyed said news often or sometimes upset them; just over half said it scared them.

Dr Jocelyn Nettlefold, director of the ABC-University of Tasmania Media Literacy Project, says the responsibility of equipping students with media literacy extends beyond teachers and schools.There needs to be greater community dialogue about the challenges, she says “Bring parents in and let them know what students are learning. Students can also feedback into families and the local community.” Media outlets, digital platforms, academic institutions and community organisations such as libraries, can help educate students – of all ages – in media literacy, Nettlefold says.

Nettlefold also co-authored the report Insight Five: A snapshot of Media Literacy in Australian Schools, which explores the challenges of teaching young people to separate fact from fiction. She says one of the main difficulties is that teachers consume and understand news differently to students.“There needs to be an awareness of the use of computer algorithms to manage and distribute content, the ability for automated data targeting to drive polarisation, the role of bias, and analysis of emotional responses,” she says.

Dr James Goulding, education lecturer at the University of Sydney, and a former history teacher, says many of the established strategies – such as looking at authorship, language and references – are based on print material and this poses limitations. He says websites can be manipulated to appear credible, but the information can be false or misleading. “Holocaust denial websites adopt all the language conventions of scholarly sites, even though the content is clearly false. So, using established criteria is not always an effective way of determining the credibility of the site.”

On the other hand, discredited websites should not necessarily be ignored but used as a teaching tool. For example, most students have been told not to use Wikipedia because it’s not considered credible. But Goulding says the binary notion that websites are credible or not could be damaging critical thinking. “If students think that Wikipedia is not a source but use it anyway, they are not necessarily applying their critical thinking and interrogation skills.

It’s about teaching students how to use unreliable sources such as Wikipedia and YouTube well, he says. “People get hung up on the authenticity of Wikipedia and how easy it is to edit, but all those changes are accessible. Students can critically look at references, edits, and discussions. “It goes the other way as well. Just because a website has .org or the language is scholarly, students still need to evaluate and interrogate it,” he says.

Meanwhile, it’s difficult to detect fake news or misleading content if we’re already inclined to believe that point of view, says Goulding. “Our emotional attachment to an opinion makes it seem more credible.” “Strong critical thinking” is the not just the ability to critique the views of others, but also the capacity to reflect on our own biases and worldview, and consider how our beliefs might affect our judgement, Goulding says.

ABC Education has a range of media literacy resources for teachers and students at: abc.net.au/education/media-literacy/

This article was originally published in The Australian Educator, winter 2020