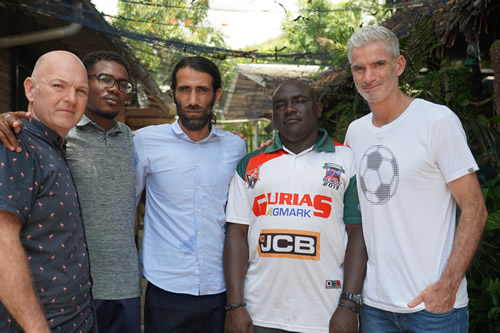 Most refugees and asylum seekers held on Nauru and in Papua New Guinea have been detained for more than seven years and are experiencing catastrophic levels of trauma and illness.

Speaking to delegates at AEU’s federal conference in February, broadcaster and human rights advocate Craig Foster urged teachers to support a campaign for their resettlement.

The #GameOver campaign calls on the federal government to take up offers from countries such as New Zealand, Canada and the US to urgently resettle the Nauru and PNG-detained refugees and people seeking asylum.

The campaign is about bringing innocent people to safety, rather than engaging in “intractable” policy arguments about border control or immigration, Foster says.

On the GameOver website, he says: “We have to find a better way to control immigration without hurting innocent people, and I know we can. But it has to start with saving these people who are in deep pain.”

Foster says it is essential to change the way asylum seekers and refugees are detained, and demonised. “Whilst Australia says we’re the most successful multicultural country in the world, some sections of society – for example, refugees and asylum seekers – would challenge that.”

We need to have a discussion with all Australians about diversity, about how people are demonised and about basic human rights, freedom and equality, and dignity and rights for all human beings,” he says.

By mobilising people power Foster believes that, as a nation, we can help the final 433 refugees and asylum seekers out of offshore detention and see them safely resettled.

“Ultimately, this is about the type of Australia we think we are, or want to be. Please help.”

All refugees are ‘Hakeem’

Broadcaster and human rights advocate Craig Foster is a former Socceroos captain who led the successful 2019 campaign to free Australian-based refugee and soccer player Hakeem al-Araibi. Hakeem was detained in Thailand and faced deportation to Bahrain under false charges.

Foster wrote about the extraordinary international campaign in a book, Fighting for Hakeem.

“The idea was to transfer some of the goodwill from Hakeem across (to other detained refugees),” he says.

“We said ‘all refugees are Hakeem’, and they are, of course. In fact, there’s a number of former professional sportspeople offshore who are exactly Hakeem … just a different sport.”

I am calling on you to free the people Australia has kept trapped on Nauru and Papua New Guinea for more than seven years.

There are options to get them to safety; the US, Canada and Switzerland have already resettled many of these people. New Zealand is also willing to help.

Their situation is desperate. We need you to act before the death toll of 13 people who have been murdered or died in Australia’s offshore centres, grows even higher.

Please, act urgently and get these people to safety.

This article was originally published in The Australian Educator, Winter 2020