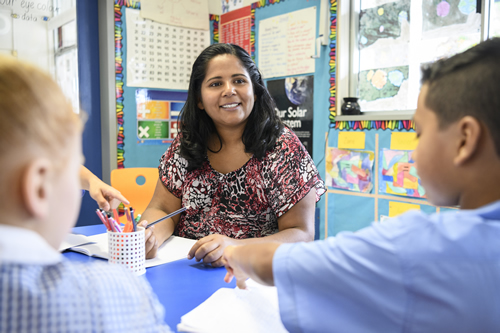 Before Jackie Barry took up her current role as principal at Onslow School, a remote K-12 school of around 130 students in Western Australia’s Pilbara, she spent a decade in small towns around the state and was frequently the only Aboriginal and Torres Strait Islander teacher on staff.

It was often challenging. At her first posting in Mullewa, 450 kilometres north of Perth, she was introduced to the all-Aboriginal and Torres Strait Islander student body as the “nice new Indian teacher”.

“People thought I was Indian because I had long dark hair and always wore it in a plait,” says Barry.

There were other challenges at Mullewa. In 1997 there were still “clear distinctions about which side of the bar you could sit if you were a certain colour”. That, says Barry, made socialising with colleagues uncomfortable.

So she returned to her hometown of Geraldton to teach at her former secondary school, which she had left in Year 11.

Barry likes to share that experience with her students to show that even if you don’t finish secondary school, there are other options.

“I was the first of my mob to go to university and complete it. Now our next generations coming through are on traineeships or working, so we’re hopefully breaking through that cycle of unemployment,” she says.

Bridge began teaching in the Kimberley, where he’d lived all his life. While there weren’t many other Aboriginal and Torres Strait Islander teachers, he credits his first principal and other colleagues with his early professional development. Others aren’t always so fortunate, he says.

“The cold, hard facts are that a lot of Aboriginal students live complex lives,” says Bridge, currently on leave from his role as principal of Derby District High School.

“There are cultural and family obligations placed on them, and at the same time the important work-related obligations from the education system.”

journey through secondary schooling, into higher education and a teaching career. Bridge wants to see more commitment from governments “to empower Aboriginal people within school systems to be the future leaders”.

“We can’t rely on the system to actually make a change. It’s very much dependent on whether the leadership and director general of the day, care. and are prepared to drive the change.”

None of its recommendations were adopted by federal, state or territory governments.

“Everyone dropped the ball on that one,” says Bridge. “There’s no accountability about implementing very proactive recommendations and that unfortunately had not been actioned.”

At a state level, however, things are moving ahead. The SSTUWA has been working with the education department
to address the decline in Aboriginal and Torres Strait Islander teacher numbers and principal appointments to public schools.

“The department has put in place an aspirational leaders program, and Aboriginal principals and the union are involved in the implementation,” says Bridge. “It’s a really positive move in terms of identifying and supporting future Aboriginal leaders.”

Equally important will be the development of culturally appropriate reflective practices and support systems for people on the Aboriginal and Torres Strait Islander leadership pathway.

“This proactive program has allowed experienced educators to share experiences of their leadership journey with others and let them know when they could face possible challenges.”

Dr John Davis, chief executive officer of the Stronger, Smarter Institute, agrees that since MATSITI there has been no national driver to ensure the substantial government investment necessary to embrace Aboriginal and Torres Strait Islander leadership.

“We need more than just piecemeal approaches,” he says.

Davis grew up in the Brisbane suburb of Logan, where strong ties with his family group exposed him to Aboriginal and Torres Strait Islander youth and support workers in the community. He was inspired by his older siblings and cousins who attended university.

Davis ended up being able to be what he saw, and now he’s excelling and paying
it forward at a school and professional level. “You don’t realise how many amazing Indigenous thinkers are out there until you get to be embraced or supported by organisations like Stronger Smarter,” he says.

Barry also advocates maintaining tight Aboriginal and Torres Strait Islander professional networks. “I used to know all the other Aboriginal teachers and leaders and where they worked,” she says. “But that’s gone now because we’ve lost numbers.

“So we’re working with the department to make it happen again, because the kids in the classrooms need to see themselves reflected or in the leadership of the school. If they can see it, they’re more likely to aspire to it,” says Barry.

This article was originally published in Australian Educator, Spring 2019