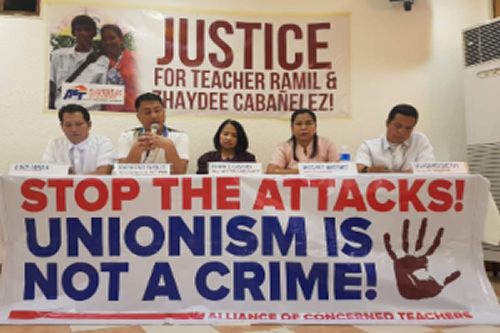 The Duterte regime in the Philippines has intensified attacks against the trade union movement.

The Education International is particularly concerned about the harassment and repression targeting its affiliate, the Alliance of Concerned Teachers (ACT).

Several ACT offices were raided by the police and at least one ACT provincial coordinator was arrested in a new crackdown against unions and civil society organisations in the country.

The repression operations are ongoing, and ACT fears that more of their members could be targeted.

The union had to close offices to ensure the security of its staff, members and officers.

The anti-union climate has caused unionists, teachers and academics to fear for their rights and safety.

As a result, the Education International has launched this new campaign on LabourStart to protest against the repression and to show support for the teachers' union in the Philippines:

Please take a moment to click on that link and add your name to this campaign.

Share this campaign with your friends, family and fellow trade union members.