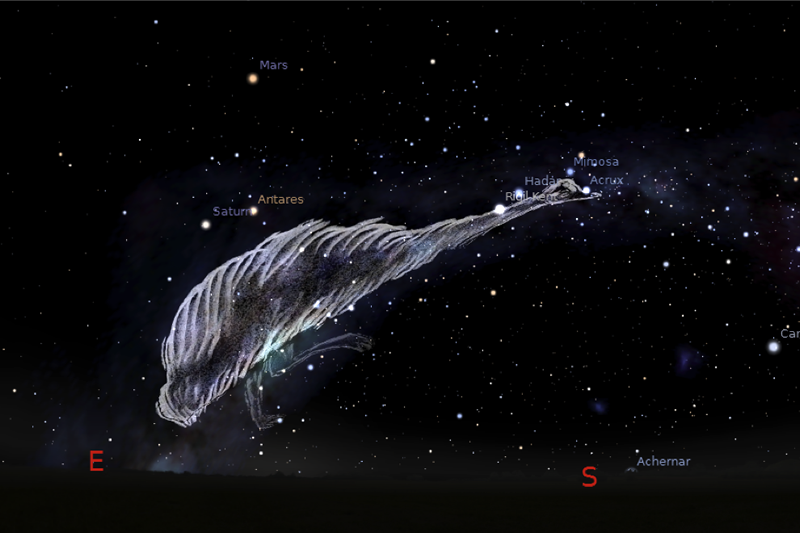 Unlike the Western approach, Aboriginal astronomy takes into account the 'negative spaces' of the sky, as demonstrated here in an an image of Emu in April.

They’re optional resources that have been developed in response to feedback from teachers looking for ways to implement the Aboriginal and Torres Strait Islander Histories and Cultures cross-curriculum priority in STEM subjects.

One elaboration, for example, explains how students can learn about chemical sciences, and the different types of chemical reactions that are used to produce a range of products, by investigating the methods employed by Aboriginal and Torres Strait Islander peoples to convert toxic plants into edible food products.

To develop the elaborations, the existing curriculum was “mapped” for opportunities to include Aboriginal and Torres Strait Islander science perspectives, says Joe Sambono, a Jingili man, zoologist and curriculum specialist with ACARA.

The ACARA advisory team then undertook the complex task of developing culturally appropriate background information that navigated the sensitivities and protocols of diverse Aboriginal and Torres Strait Islander groups.

“We needed to ensure the content was non-secret and non-sacred,” says Sambono. “And we wanted to reduce the fear and anxiety that non-Indigenous educators have raised with us about not offending people and ‘doing the right thing’.”

“By providing culturally relevant material for our students through these ‘mirrors and windows’ into the curriculum, we hope this translates into greater achievement, including joining the STEM economy. This will be a game changer.”

The feedback has been overwhelmingly positive, says Sambono. “The Aboriginal and Torres Strait Islander community are so happy to see our mobs being recognised in this way.

“And educators want more, and soon. They tell us: ‘It’s about time this was done’.”

At the Wiluna Remote Community School in Western Australia, the goal is to apply a culturally responsive and relevant ‘mindset’ across the whole school, says Adriano Truscott who was principal up to the end of last year.

The school fosters “two-way science” in which children learn about western scientific knowledge and inquiry by first developing their own traditional knowledge systems through on-country learning, supported by Elders, families and local Aboriginal and Torres Strait Islander rangers.

Its programs support the intergenerational transfer of traditional knowledge, as well as the demands of the future workplace. A new STEM project, for example, sees local female rangers work with female students and scientists on STEM activities.

This multigenerational approach is paying off, with strong engagement by students and the wider community, recognised by awards in 2018 including the WA Premier’s Excellence in Aboriginal Education and the CSIRO National Indigenous Science Award.

Truscott welcomes use of the new ACARA science elaborations as a way to enrich learning.

“It will allow teachers and students to understand that knowledge can be deeper and broader than what it seems in the curriculum; that there are different ways of seeing a particular phenomenon.

“In a world where you want greater respect, reconciliation and collaboration, these elaborations communicate a strong message that there are other knowledge systems that add enormous value to our collective humanity and a sustainable world,” says Truscott.

Of stars, fire and water

Another set of resources for teachers – developed as part of the Aboriginal and Torres Strait Islander Curricula Project – focuses on astronomy, fire and water.

The project was developed by the University of Melbourne in consultation with teachers and Aboriginal and Torres Strait Islander communities around Australia and funded by the Department of Prime Minister and Cabinet.

The teacher toolkits are aimed at students in Years 5 to 10 and cover seven of the eight learning areas of the Australian curriculum.

Project lead Professor Marcia Langton says they can be adapted for all school years and include background explanations, classroom activities and are centred on inquiry-based learning.

“Our people have 65,000 years of sophisticated knowledge based on observing the skies, using fire and finding water,” she says.

The developers are seeing teacher feedback on these resources. Visit tinyurl.com/y7v6bd8I to view the resources and provide feedback.