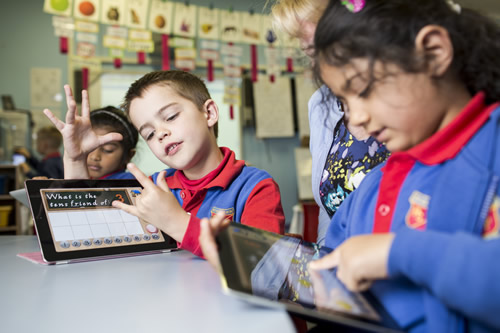 Investment in public education is a gift that keeps on giving, delivering benefits to students and communities now and into the future.

Public education provides every child with the opportunity to reach their full potential. It improves health and employment outcomes, boosts informed participation in society, and promotes equality.

Investment in education also increases earnings. Those with post-secondary qualifications earn an average of 20 to 40 per cent more than those without. That means government revenues are increased through the tax paid on higher incomes.

While spending on schools provides a direct and immediate economic stimulus, the long-term benefits to students and communities are arguably even more valuable.

Public schools provide a rich education for students, with teachers striving to meet the needs of every child. But schools are not properly funded.

By 2023, most public schools will remain below the minimum funding benchmark, the Schooling Resource Standard (SRS), while all private schools will be at or above the target.

The shortfall in funding for public schools is $16.3 billion in this Parliamentary term alone. It will climb to $22.7 billion dollars by 2023, according to AEU analysis.

A 2018 Public Education Foundation study calculated the national cost of education inequity over a six-year period at $20.3 billion dollars, equivalent to 1.2 per cent of GDP.

“The role of public education is to produce students with skills to help the country recover,” says Hetherington.

The AEU told a Senate inquiry into the government’s response to COVID-19 that an immediate injection of funds to bring all schools to 100 per cent of SRS was now urgently required.

AEU federal president Correna Haythorpe says that proper funding will not only help to bridge the equity and achievement gaps between students from high and low socioeconomic households, but extra work is now needed to support students who have fallen behind during remote learning.

Another obvious and important area in need of proper federal funding is school infrastructure.

Public school enrolments grew by 263,534 students in the decade to 2018, an increase of 10.3 per cent. New schools are needed to accommodate these students and existing schools must be improved
to increase capacity.

“Existing schools need new classrooms, libraries, heating and cooling and sport facilities to properly accommodate students now and to provide for the coming increase in enrolments.”

A federally funded school building program, made when government borrowing is cheaper than ever, would provide a valuable stimulus to Australia’s construction and manufacturing industries and drive employment, says Haythorpe.

The choice is clear

The AEU’s Senate inquiry submission says the “vast inequity” in the way federal government funding is distributed to schools means that many students are not provided with the additional resources required to enable them to overcome their disadvantage.

“If Australia is to recover and return to growth following the current economic shock, the upcoming 2020 Budget will have to provide very significant stimulus. This stimulus should be targeted where it can have the most immediate and long-term impact,” the submission says.

Research has shown that investment in public education produces more skilled workers, allowing industry to expand production and employ greater numbers of people which, in turn, increases output across the economy.

A major OECD study of 76 countries in 2015 shows that the knowledge capital of a nation improves as better educated young people enter the workforce.

Improved literacy and numeracy skills would deliver economic benefits to the Australian economy averaging $65 billion each year, according to an AEU commissioned report: Australian Schooling – the Price of Failure and Reward for Success by education economist Adam Rorris.

Australian governments are faced with a clear choice, says Rorris. “They can either position Australia to reap the benefits of a high-performance and equitable education system or they can allow the country to bear the cost of failure.

Looking to the future

“As a priority, governments must put public education first with a significant investment to address that inequity," she says.

“Many of our students are from disadvantaged backgrounds and their families have been deeply affected by this crisis. In communities across Australia, education is the stabilising factor for our children. It not only leads to better life outcomes for individual students but enormous long-term benefits to society, the economy and the entire country.

“There’s an imperative for governments to invest in public education to remove inequality and make sure that every child receives the education they need.”

The AEU is calling on the federal government to: