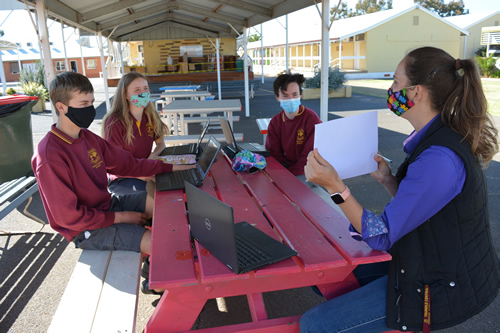 Making a game of it

Trundle Central School was especially upbeat on the last day of Term 3, when its students were able to return to face-to-face classes after five weeks of lockdown, even if only for one day.

“The students were excited to see each other because so many don’t have the internet or mobile phone service at home to connect with remote learning,” says Emily Price, an agriculture, mathematics, and science teacher at the school.

For maths, she used an online resource for students to build two spinners – one with numbers and the other with a mathematical operation such as addition or multiplication. She gave them a pronumeral to work with, too.

“They had to write the word phrase for the algebraic expression that was created. For example, one spinner records a 106, the other shows ‘addition’ and they were given the pronumeral g, creating 106 + g.”

For a science activity, students picked flowers from their gardens, placing the petals in hot water to drain the colour, then used the remaining liquid to test whether household substances such as toothpaste or vinegar were acid or alkaline, says Price.

“They observed the colour change to predict if the substance was an acid or a base. It wasn’t as accurate as it would be in our science lab, but it was very useful for the chemical reactions unit they were learning.”

The school’s learning and support teacher mentored Price on collecting and analysing student data and she kept her maths classes on track during remote learning by writing out and colour coding the steps to pace students through problems.

“I had some great feedback from students and parents – they emailed me to say the steps were easy for parents who couldn’t remember algebra from their school days to follow,” says Price.

“One of them focused on COVID as an infectious disease in the biology unit. It was great to have topics that are so relevant now to teach my students.”

Learning to be flexible

It’s been a topsy-turvy year. The local and regional agricultural shows were cancelled due to COVID-19, so Price hasn’t been able to test her students’ sheep and chicken “showing” skills.

“The most important thing as a teacher is to be ready for big and small changes in our work, including the move into and out of remote learning. I might have planned an ag practical lesson, but if it rains, I have to make it a theory lesson. Or, if my students struggle with particular concepts, I’ll have to revisit those even though I didn’t plan to. Teachers have to be adaptable.”

That includes coping with what could be the second mouse plague this year for her rural district.

“Mice were in a lot of the classrooms, storerooms, the staff room, my desk, the students’ books and my ag equipment. They were running across the playground and sometimes found in students’ bags. Primary teachers had to be very vigilant because a few kindergarten kids accidentally left their lunchboxes open and they’d find mice in with their food,” Price says.

It might be difficult to see a silver lining when your school operations are suspended and school buildings are deep cleaned after a COVID-19-positive case. But for Justin Pronin at the ACT’s Harrison School, there were some unexpected bright spots.

One was the opportunity to see his students interacting with their families after Harrison School made the national news in August when the positive case was discovered.

The Education Directorate alerted staff and families about the case, five days after a lockdown was announced in the ACT, telling them to get tested and to quarantine for two weeks.

“Our whole school closed down. That was a big deal for families,” Pronin says.

A couple of days later, a nearby school became a pop-up testing clinic for the staff and families in the Harrison school community. “Seeing students with their families was another piece of the puzzle to understand students better,” he says.

During the first week of the ACT’s lockdown, students were able to tap into online learning resources created by the directorate. It was an initiative negotiated last year by the AEU to give teachers five days of pupil-free time to prepare for remote learning.

Harrison’s COVID case gave staff an extra four days to get tested and students continued to use the directorate’s resources, says Pronin.

“The directorate had an interactive website with resources and a daily schedule for students. It was good to get that support. We were able to post links to students and support this with homeroom sessions.

“It was good support, and it was really positive for the union to get that agreement with the Education Directorate,” says Pronin.

Pronin has learned to give both himself and his students a break as he has adjusted to the demands of remote learning.

He discovered that taking a breather to reflect on a task – sometimes even taking a short walk – helped him to finish the job “faster and better”.

Easing the pressure on his students is also paying off.

“Sometimes, they might not want to interact with each other, or refuse to turn their cameras on. I feel a bit like a video game streamer: performing, putting on a good mood, and showing my personality to hopefully engage, inspire and reel students in.”

Nonetheless, he enjoyed challenging and extending his Year 10 English class as they studied Shakespeare’s Macbeth.

In Term 4, he’s looking forward to running the student leadership elections for 2022.

“I enjoy doing the planning for the Year 7 and 8 prefects’ election and helping the Year 9s who want to go for captain. They fill in a detailed form then deliver a speech or video. It’s great for the school culture and positive for students to know they’ve got a voice in how it’s run.”

In lockdown, Pronin has not been able to play his usual competitive sports so, in his free time, he has been sketching with pencil and charcoal.

“I draw figures from the computer games Warcraft and Diablo, which I played growing up. I like the aesthetic of them. I find it fun and creative to draw during school holidays (or lockdowns).”

This article was originally published in The Australian Educator, Summer 2021