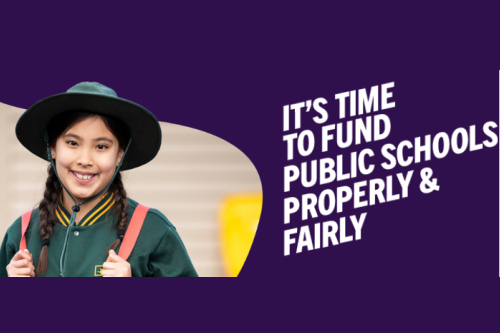 The Australian Education Union has launched a new campaign calling for federal politicians to ensure every school is provided the resources it needs to ensure every child gets the best education, regardless of their background or circumstances.

Unveiled before Parliament House in Canberra today, the ‘Every School. Every Child.’ campaign imagines the positive difference if every school was provided with the full funding they need for every child to succeed, asking all political parties to:

Across Australia, public schools are making a significant difference in the lives of Australian children, helping to level the playing field, overcome disadvantage and achieve excellence for all. That’s despite governments failing to properly and fairly fund public schools.

Federal school funding legislation and bilateral funding agreements between Commonwealth, State and Territory governments mean that less than half of all public schools will reach 95 per cent of the SRS by 2023, denying public schools the vital resources needed for their students and entrenching school funding inequality across Australia.

A report by economist Adam Rorris has calculated the overall funding shortfall at $27 billion over the next four years. In addition, with the Federal Government providing zero capital funding to public schools the Rorris report showed that the cumulative Capital Investment Gap between public and private schools was $21.5 billion from 2013 to 2018.

The ‘Every School. Every Child.’ Campaign will target political parties to secure public school funding commitments and mobilise school communities, including teachers, principals, support staff, parents and community members, in the lead up to the next federal election, to ensure that the broader community understands the importance of properly funding public schools for Australia’s children.

To join the campaign to make sure public schools are funded properly and fairly, to give every child the opportunity for a bright future, register at https://www.everyschooleverychild.org.au/