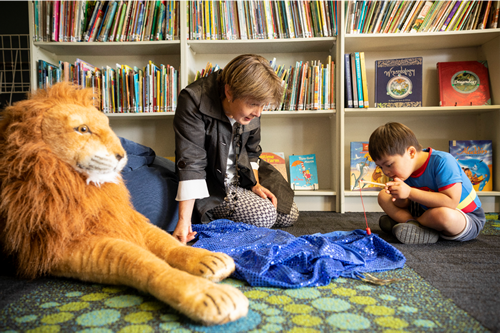 The massive cut was a blow to schools struggling to fund appropriate resources and support for students with disability. Worse, public schools are preparing for a further $19 billion shortfall in general funding over the next four years.

The AEU’s State of our Schools survey found that nine out of 10 public school principals were battling budget issues in their efforts to continue supporting students with disability.

The new approach to calculating funding loadings is set by the Nationally Consistent Collection of Data on School Students (NCDD) according to the level of educational adjustment required by a student with disability, to participate in school on the same basis as a student without disability.

But the loadings are insufficient, and many students are missing out, says Haythorpe. “Students in the category ‘support within quality differentiated teaching practice’ are recognised as having disability, but no additional resources are provided to support them.”

The AEU wants an urgent review of the categories and loading levels to calculate the real cost of ensuring students with disability receive a quality education.

Mark Zirnsak says he is fortunate his 13-year-old daughter Chloe was able to access Bulleen Heights School in Melbourne’s north-eastern suburbs because “we only just made the cut-off”. All Bulleen Heights students must meet the Program for Students with Disabilities requirement for Autism Spectrum Disorder.

“I really feel a lot of empathy for the parents whose child is not rated at a high enough level of need to get this specialist support,” says Zirnsak, who believes the school suits Chloe’s needs.

“More resources would always be welcome, but I would say that Bulleen Heights is a good example of what well-funded public schools can achieve. I know that’s not universal, so there is definitely a need across the school system for greater resources, but in Chloe’s case, there are no obvious gaps in the support that she’s given and in meeting her needs,” he says.

It can be a challenge for parents to find support for children with additional learning needs and developmental disorders, says Public Education Foundation executive director David Hetherington.

The Foundation, a not-for-profit organisation that provides scholarships to young people in public education, is noticing an increase in applications for early-to-middle years high school students recently diagnosed with conditions such as autism spectrum disorder and attention deficit hyperactivity disorder.

“It’s a big strain on the families to navigate not only the school system but the broader health system, and they are usually under financial pressure,” says Hetherington.

Scholarship funds are often used to purchase laptops and specialist software to help a student pursue a particular field or interest. Not-for-profit organisations and state governments are left to pick up the Commonwealth’s shortfall in support and resources for students with disability.

The Victorian government last year announced a $1.6 billion investment to help ensure an inclusive education for students with disability.

Glenallen School, a specialist school in Melbourne’s eastern suburbs, is one beneficiary.

Teacher Hanae Honda says part of the school’s $7.9 million allocation will upgrade its 40-year-old pool, which is currently out of action because of a leak.

“Hydrotherapy sessions are so important for kids with physical disabilities. The pool has been out of order since term one last year. We’ve been trying to find the funds to fix it, but it’s a very costly exercise,” says Honda.

“Ironically, our school is located between Wesley College and Caulfield Grammar. It makes me so angry every time I drive past – their grass is always green, and they just updated the front gate and the car park; while we’ve got an old school sign that hasn’t been updated for many years.”

“More funding would be great – a lot of our students need quite individualised support – so the more staff we’ve got, the more support we can provide.

Wallace says the school has a long list of projects it could take on with extra funds, but one priority is extending its small-scale gardening program to become an urban farm on school land in partnership with a not-for-profit organisation. Students will assist with the planting, harvesting and delivery of produce, which will help to provide them with career pathways, says Wallace.

“The more funding you get, the more you can expand opportunities for students. Whenever we see funding opportunities we always think, what can we apply for?”

This article was originally published in The Australian Educator, Autumn 2021