A dying trade that is still in great demand? 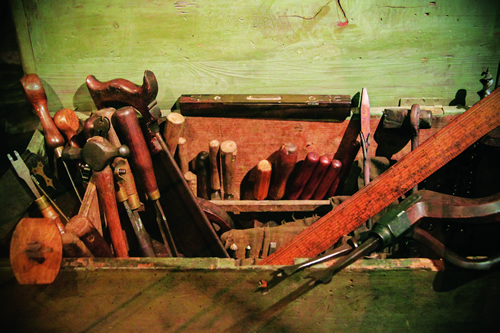 The engineering patternmaking trade in focus.

It is often assumed that digital technologies have replaced traditional trades, and skilled tradespeople must simply retrain and be ‘agile’, and catch up with the new technologies. But when you take a close look at manufacturing processes, and speak to workers and employers, it becomes apparent that technological tools alone will not save what is left of Australian manufacturing. Industrial craft still exists, and it still matters.

Right now, shortages in skilled trades are holding back local manufacturers, and without the capacity to hire from overseas, Australia has a real problem. A concerted governmental focus on re-funding TAFEs would go a long way to addressing these skills shortages, as well as providing a much needed boost to the development of Australia’s long-neglected trade skills. Secondly, once apprentices enter the training system, they need to be adequately supported by government as they complete their training, particularly if it involves some online distance education, as well as travel to training facilities.

The Australian foundry sector is a case in point. Foundries are factories where castings are created by melting metal, pouring it into a mould and leaving it to solidify. A great deal of machinery and equipment is dependent upon castings and the industry sector is dependent on them. The work of foundries goes beyond engineering for rail and roads and extends out to agriculture, building, freight and transport, power transmission, public utilities and irrigation sectors to name just a few.

Yet for many years, Australian foundries have experienced difficulty finding qualified tradespeople and apprentices in moulding, engineering patternmaking and affiliated trades. The challenges of Covid-19 have resulted in a boon for local foundry production, but, as explained by Joe Vecchio, Secretary of the Australian Foundry Institute, it is difficult to expand production, due to a lack of skilled workers. Some businesses have resorted to using unskilled labour and providing in-house training.

While attempts have been made to revive foundry apprenticeships in Victoria and NSW, via a flexible training method, currently the only dedicated training site for foundry skills is TAFE Queensland, at Acacia Ridge.

Over the past five years I have focused my research on the Australian foundry sector, and more particularly, the trade of engineering patternmaking. Engineering patternmakers use technical drawings to construct a 3D pattern (a bit like a model), which is used to produce a mould for metal casting or plastics production. Traditionally a refined woodworking trade, patternmakers make patterns for objects as large as the buckets on the end of bulldozers, and as small as the moulds for glucose jube lollies.

Patternmaking represents a particularly interesting problem: it is largely considered to be a dying trade – and it is unfathomably small in numbers – and yet foundry and patternshop employers are desperate for skilled patternmakers, and find it very hard to secure them. With only four apprentices currently undertaking engineering patternmaking apprenticeships at TAFE Queensland, the problem will only worsen in the next five years. Similar challenges are faced in the toolmaking trade.

So what can we do?

Moving into the future, the survival of engineering patternmaking – among other trades – must be taken seriously, rather than written off as already redundant. If funded and prepared adequately, apprentice training could be revived at a state-based TAFE level, with an emphasis on merging digital fabrication skills with traditional craft knowledge.

New research: a catalyst for change

Academic research has the potential to not only shine a light on issues in society, it also inform the thinking of policy makers and leads them to solutions. Of course, there needs to be political will for change in the first place, but I’m encouraged that the Australian Research Council has agreed to fully fund my application for a three-year research project that will focus on skilled trades, and their relationship to Australian design and local manufacturing production. The project is an ARC Discovery Early Career Research Fellowship (DECRA), and it is titled Australian Design, Trades and Manufacturing 1945-2007: Connecting Histories.

The project is unique because it turns attention to the specific relationship between Australian designers and manufacturing tradespeople, covering the period 1945-2007 (post World War II to the 2007-08 Global Financial Crisis). How did Australian designers’ work gradually transform with deindustrialisation, globalisation and technological change? And what happened to the local manufacturing tradespeople who previously had close ties to a local design sector?

At the essence of this inquiry is a focus on generative knowledge-sharing between designers and tradespeople: how did people communicate, what were the shared understandings, and how did people shift in their employment pathways, across and between manufacturing, teaching, and creative fields?

This is not merely a case of bringing ‘Group A’ and ‘Group B’ together, but an investigation into a productive space in which skilled makers of all kinds worked collaboratively. As with my previous research, this project will involve oral histories and archival research, as well as a podcast.

TAFE teachers have been at the forefront of the shifts between historical and contemporary contexts and I’m sure will have many stories and much to say on industrial craft, manufacturing, repair, skill loss and human redundancy in the face of economic and technological change. Stories that will be a vital link and need to be heard.

Dr Jesse Adams Stein is a Senior Lecturer and DECRA Fellow at the School of Design, University of Technology Sydney. Jesse is the author of a book on Australian printers, Hot Metal: Material Culture and Tangible Labour (Manchester University Press, 2016), and her second book, Industrial Craft in Australia: Oral Histories of Creativity and Survival (Palgrave Macmillan) is due out at the end of 2021.

Do you have a career background that has shifted across and between trades training, manufacturing, vocational education and/or creative practice? Maybe you started in an apprenticeship, worked in manufacturing, then taught at TAFE? Maybe you worked in a technical support role in Australian manufacturing and then shifted to set design or commercial art? Or perhaps you used to work in the rag trade, then retrained when the local textiles industry dissolved? Would you like to tell your life story (as oral history), and have it recorded with the National Library of Australia? If you think you have a story to tell, please email [email protected], with a short summary of relevant life history details (300 word max).

This Article was originally published in The Australian TAFE Teacher, Winter 2021