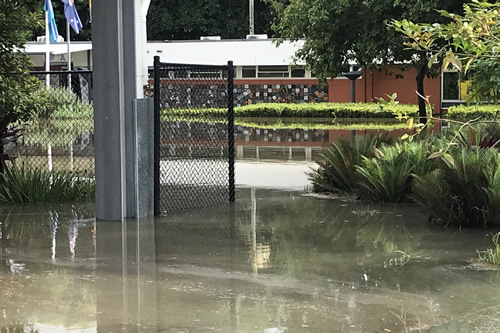 Almost 1350 schools were forced to close and some areas recorded more than their annual rainfall in a week. It was Queensland’s worst flooding since 2011.

As the waters subsided, it was clear that eight northern New South Wales schools and six Queensland schools were significantly damaged.

Australian Educator spoke to two teachers whose schools were seriously affected and another who reflects on the 2011 Queensland floods.

On the morning of Lismore’s worst flood on record, Chris Williams was out in his boat rescuing people.

Williams, the executive principal of The Rivers Secondary College, responded to the desperate pleas of people sitting on their roofs or trapped in their homes as floodwaters rose to 14.4 metres in the NSW Northern Rivers town on 28 February.

“There were hundreds of guys in tinnies, dodging underneath powerlines, getting people out of their homes. The impact of the flood on the town was absolutely horrific,” he says.

The college’s Richmond River campus in North Lismore – the site of the original Lismore High School, which opened in 1918 – was inundated by floodwaters, damaging the entire campus.

About 200 of its 700 students, along with 200 students from the college’s other two campuses and about 50 staff lost their homes and possessions.

The Richmond River campus was closed while demountable classrooms were installed and its students moved to the Lismore High campus.

Manual timetabling was completed in a week, the curriculum was juggled, and bus runs were reorganised. Class sizes were stretched and students in Years 7 to 10 began attending four days a week so the Lismore campus could support 1200 Richmond River students.

Heart-warming acts of generosity and stellar feats of coordination have helped students and staff, who have a long list
of losses and needs.

“Our uniform supplier went under and there was limited supply from the warehouse. Staff were buying clothing in similar colours on their credit cards because that’s what the kids connect with: the uniform,” says Williams.

The college secured about $30,000 from the Vincent Fairfax Foundation to replace stationery, backpacks, lunchboxes, and drink bottles.

There was more support in the form of vouchers and funds from schools and organisations across the state and via the New South Wales Secondary Principals Council. “We’ve been able to get those to the families in most need and that’s been the biggest strength and support,” says Williams.

In the thick of the crisis, the school relied on its campus canteens to feed students. “We were doing breakfast, lunch, and take-home meals for anyone who needed them.”

Williams says that while counselling is available for students and staff, the uncertainty about the future of the school, peoples’ homes, and the town is likely to take its toll. Many families are still living with other families or in caravans and COVID-19 continues to spread.

“Teachers do a great job of looking after kids’ wellbeing and ensuring they get what they need for their education – always have done and always will – however finding a place to call home and the feeling of connection is going to be the challenge,” says Williams.

Most of the classrooms at Milpera State High School, in Brisbane’s south-west, went under water thanks to the same ‘rain bomb’ that hit Lismore in February.

Principal Julie Peel says 14 of its 17 classrooms were affected. “We had somewhere between 20cm and one metre of water through every ground-floor classroom.”

Peel has worked at the English language intensive high school for 17 years and was a teacher during a previous flood in 2011. “The staffroom looked like a filthy washing machine in 2011, everything was strewn. It was very muddy, and I just cried.”

There was no time for tears as the 2022 floodwaters subsided and she focused on finding a temporary home for the school.

A brainstorming session with her assistant regional director led to an approach to Yeronga State High School, an inner-city school with a strong sense of social justice, with a request to share its site.

“The school wanted their kids to learn the value of giving and caring for others and they said without any doubt they wanted us in their school.”

The Milpera students relocated within a week. “That’s the power of people who give extra in their jobs in a crisis, just to make certain it’s done for students.”

It became part of the learning experience for the students who were encouraged to expand their language skills and make comparisons between the schools.

Meanwhile at the Milpera site, the state government organisation QBuild and a private company worked 12-hour days, seven days a week to repair the classrooms.

Staff and students returned at the beginning of term and 40 new enrolments lifted student numbers to almost 200.

The experiences of incoming students help put the loss of its resources into perspective, says Peel.

“We are enrolling so many people who are from Afghanistan and the Ukraine who have lost their home, their country, and their families are divided. That brings a lot of this into perspective for us.”

Libby Brain was an itinerant teacher dividing her time between several schools when the Queensland town of Grantham was hit by a 3m wall of water on 10 January, 2011.

The experience was devastating for people living in the low-lying area of Grantham. Twelve people died in the floods.

“A lot of people climbed up onto the railway line and ran – they were running from the water as it was coming,” says Brain. “It was pretty horrific.”

Grantham State School, which is on higher ground, didn’t flood, although water ran through the school grounds. It became the emergency evacuation point for people who had fled their homes.

“They were in all the classrooms and people had brought their dogs, cats, and birds. There was even an owl,” says Brain.

Joan Quinn was the principal at Mt Whitestone State School, a two-teacher school in another part of the Lockyer Valley.

“My school itself wasn’t flood-affected, but some of the families in the school were. I had one family in Grantham who lost everything.

“We had to deal with more than the flood damage. For the families in my school, it was the grief at losing their livelihoods, their houses and their community.”

The situation led to some rapid adjustments at the beginning of the school year.

Brain returned to the classroom so that Grantham’s then teaching principal could concentrate solely on her leadership duties for two weeks.

Two weeks turned into years, says Brain. “As time went by, I became very involved with the students and their experiences, and I felt that it was important that I be there for them and create a sense of continuity.”

“Even though the school wasn’t damaged, the lives of many of the families needed to be rebuilt.”

Brain says the losses suffered by the children in her Prep–Year 1 class – from siblings to friends to their homes – often came out in their drawings.

“The pictures were dark, and they would have lots of water rushing over them,” says Brain.

But over time the healing process was evident in the children’s drawings.

Counselling was available for teachers and children and their families, but not everyone took up the opportunity. “In the early stages there was a large influx of support from guidance officers. Toowoomba regional office pulled them in from different areas and they would talk about how to best meet the needs and cope with some of the distressing situations.”

Now retired, Quinn says it took about two years to get some stability back. “Your life never goes back to what it was. You have to adjust to the new normal.”

This article was originally published in The Australian Educator, Winter 2022