High hopes for action on shortages 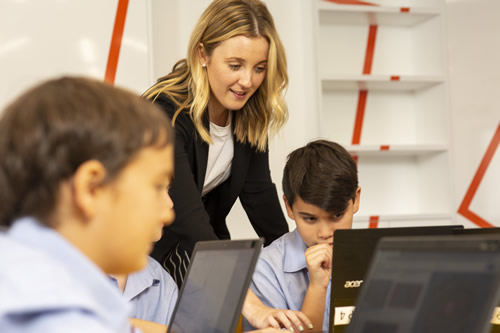 The teacher shortage crisis has been decades in the making. The evidence of a disconnect, caused by falling attraction and retention rates and rising enrolments, has been plain for many years, says AEU federal president Correna Haythorpe.

“All the while, workloads have been increasing, pay has stagnated and much-needed classroom support for students from disadvantaged backgrounds has been inadequate,” she says.

Yet, acknowledgement of the growing crisis by the Commonwealth government has been largely ignored. It has taken the fallout from a pandemic to focus attention on an issue that teachers and schools have long struggled with, says Haythorpe.

Federal government modelling predicts a shortage of more than 4000 secondary school teachers within two years and an increase in primary and secondary school enrolments of more than 10 per cent by 2031. But fewer new teachers are graduating and university completion rates are at around 50 per cent. Enrolments in teaching degrees dropped by 8 per cent between 2017 and 2020.

The Albanese government offers teachers, students and school communities fresh hope for a positive future. Minister for Education Jason Clare convened a round-table of all state and territory education ministers, teachers and key stakeholders, including the AEU, in August to consider the workforce crisis. The ministers resolved to convene a national taskforce, which includes the AEU, and to work on a national plan to be delivered in December.

Restoring respect and trust in the teaching profession is an important first step, but an action plan alone will not resolve the crisis, says Haythorpe.

“This crisis is multilayered, not only in attracting new teachers to the profession but in retaining current teachers with better pay and conditions and respecting their professional autonomy. There is no short-term fix to this crisis, it will take strategic action and political will to resolve,” she says.

Clare says he was moved by the stories of two teachers who addressed the ministers. “Angela [McDonald, a teacher] was almost in in tears … talking about working 60, 70 hours, working on weekends. And another teacher who talked about doing lesson prep on Mother’s Day, putting the kids to bed and then going back to do more work once they were asleep,” Clare told journalists.

He says ministers agreed that proposals were needed to encourage more people to become teachers, better prepare beginning teachers and find ways “to keep the fantastic teachers we already have”.

ACT education minister Yvette Berry says she wants to thank Clare for “reassuring teachers that he has their backs because that’s something that they haven’t heard for a number of years”.

Get the basics right

He says the NSW government’s $125 million Teacher Supply Strategy did not deliver any teachers in the first nine months. “As for lowering qualifications and rushing people into teaching, research shows this to be poor policy because, apart from lowering educational standards, program costs associated with such policy settings are extremely high and retention rates tend to be extremely low.”

Gavrielatos says departmental documents reveal that teacher vacancies increased by 67 per cent to 1657 in the 12 months to June 2022.

“No amount of spin, no number of brochures, no amount of gimmicks will solve this crisis. We need teachers in their thousands, not in their hundreds,” he says.

The crisis will only be resolved by addressing the fundamentals to attract and retain teachers, Gavrielatos says. That means competitive salaries and better working conditions including dealing with the “crippling workloads that are accelerating the exodus of teachers”.

The NSW government knows this, he says, considering its own internal briefing paper concluded: “the demands and expectations on teachers are increasing, while the current rewards, pathways, and learning opportunities are not providing enough incentive.”

The recent industrial agreement in Victoria included some significant improvements to address teacher workload. These include a one-and-half-hour reduction in face-to-face teaching per week, nine to 11.5 hours per week for planning, preparation, assessment and collaboration with those duties exclusively directed by the teacher, and time in lieu for structured school activities such as parent teacher meetings and camps. But more needs to be done.

The AEU Victorian branch has called on the state government to commit to a 10-year plan that includes immediate action to ease the shortage, and longer-term measures to improve workforce planning.

An estimated 11,000 new teachers will be needed in Victorian public schools over the next 10 years, plus an extra 11,000 early childhood teachers and 5500 educators.

AEU Victorian branch deputy president Justin Mullaly says topping the list of immediate responses is a retention payment for existing staff in kindergartens, schools and TAFE, to provide an incentive for them to stay in their jobs.

The 10-year plan also calls for workloads to be eased immediately through the implementation of the new agreement clauses and by increasing support staff, reducing administrative and compliance work and delaying or abandoning new initiatives and significant program changes.

Improving mentoring and coaching support for early-career teachers is another essential element to retain teachers. The 10-year plan says the current trial of reduced face-to-face teaching for early career teachers must be expanded to all public schools.

Mullaly says the plan also includes a recommendation for a return to studentships, focusing on rural, regional and hard-to-staff schools, kindergartens and TAFEs. The studentships would provide financial support during study and secure employment after graduation.

In the Australian Capital Territory, positive moves are underway towards easing teacher workloads and shortages after an AEU survey earlier in the year revealed the extent of concerns.

The survey of more than 1800 members found ever-increasing demands on school staff, a lack of relief teachers and concerns about workplace safety.

Ninety-one per cent of respondents said their school was negatively affected by staff shortages.

The ACT government responded by establishing a joint taskforce.

AEU ACT branch president Angela Burroughs says there has been “genuine engagement and commitment from the employer to this process. It’s been really positive”.

She says the ACT education minister has approved some immediate measures to alleviate workload pressures, including the introduction of two pupil-free days for Terms 2 and 3. The government has also resolved not to open a school unless adequate numbers of staff are available.

Burroughs says attracting new staff is a struggle and there is hot competition among eastern states. But the union has come up with a range of “creative solutions” including helping teaching parents access childcare to entice new parents back to the classroom, and paying the registration and mandatory training costs for recently retired teachers or teachers returning from long-term leave.

Country concerns
Schools in remote and regional areas were the canaries in the coalmine of the teacher shortage crisis. They have long suffered dire shortages and governments have used cash incentives to lure teachers out to the bush.

But as the shortages worsen across Australia, even the extra cash is not enough to guarantee staff, says AEU South Australia branch president Andrew Gohl.

“For example, the department offered contract teachers $10,000 to work at Whyalla Secondary College, but they still couldn’t get the people,” he says.

He says better support for teachers is needed, including formal mentoring schemes and reduced workloads.

Gohl says the lack of teachers in country areas threatens every child’s right to a quality education, eroding the fundamental tenet of public education. “My biggest fear is that if you’re in the country, you won’t have access to a face-to-face teacher, and you’ll have to rely on technology.

“Administratively the tasks are really piling on. In terms of implementing any new initiative, it’s all done out of teachers’ goodwill,” Gohl says.

“The department is effectively running on millions, if not billions of dollars, of teachers’ goodwill. You can’t keep pulling every drop of blood out of teachers – it runs out eventually,” says Gohl.

AEU Tasmania branch president David Genford is also worried about a move towards digital learning if schools cannot find qualified teachers for face-to-face teaching. "Students don’t learn in the same way. They need qualified people in front of them to teach and guide them,” he says.

The Tasmanian government has failed to seriously address the severe teacher shortages in the state, say Genford.

A union campaign, Lifting Learning, calls on the government to introduce a range of measures to improve pay and working conditions, and incentives to attract new teachers.

“It highlights what the government needs to do to show respect to the profession and to make sure our working conditions and salary attract people and keep them in the profession,” says Genford.

How the shortages bite
In Queensland, the teacher shortages are having a major effect on wellbeing, a Queensland Teachers’ Union (QTU) survey has found.

Almost three-quarters of the 500 school leaders surveyed said the effect on staff wellbeing was high or significant.

Seventy-five per cent of respondents said that non-classroom-based teaching staff, such as principals and deputies, were required to take on a teaching load to cover staff absences. It also found that 46 per cent of teaching staff had not been able to access non-contact time or other working conditions each week.

Twenty-three per cent of schools had accessed permission-to-teach provisions and one school reported nine on its books, says QTU vice president Leah Olsson.

“We know that the majority are completing their fourth year of initial teacher education, but we also know there are some 24 permission-to-teach teachers who are in their first two years of education and study,” says Olsson.

The survey also highlighted the expanding effect of the teacher shortage across different subject areas.

“We’ve always had shortages in areas like maths and science but now we’re finding other areas such as technologies, instrumental music, health and PE, and the arts also have significant shortages in various pockets around the state,” says Olsson.

Students under pressure
While school leaders, teachers and support staff are exhausted and stressed from covering extra classes and teaching out of field, the potential effects on students are concerning.

“We’re getting a lot of reports of disengaged students and all the concern that brings,” she says. “If you were in Year 7 in 2020, you’re in Year 9 or 10 now and that’s a significant part of your secondary schooling that has been disrupted in some way.

“I suspect most schools will be putting the maximum resources in to make sure that the Year 11 and 12 students’ education is disrupted as little as possible. But with the existing resource allocation that can’t be sustained over a long period without other areas of the school suffering.”

Byrne says the desperate shortage of relief teachers continues, occasionally leaving some classes unsupervised because there is no other solution.

“People are just not making themselves available because of concerns about COVID, which is fair enough, but this adds to the problems that were already there.”

Ayres is concerned that the government does not understand that it will be even more of a struggle to retain teachers. Like other states, the NT education department has emptied its head office of staff with teaching qualifications and sent them into schools to fill vacant positions, rather than recruiting permanent teachers.

Ayres says while that’s satisfying a short-term need, it cheapens education and means teachers don’t have access to specialist curriculum or behavioural support staff when they need advice.

This articles was originally published in The Australian Educator, Spring, 2022