If I were education minister... 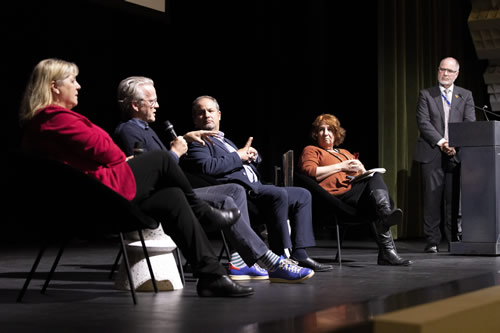 The outgoing Morrison government oversaw a decade of funding neglect and failed support for public education in preschools, schools and TAFE. But, as former prime minister Paul Keating famously said, “When the government changes, the country changes”.

“Most student needs are met, but at a significant personal cost. And while expectations are high for the new government, patience is running out,” he says.

Bates asked four education experts and activists to imagine they had been appointed education minister and to outline their plan for public education.

Q: You’ve been a fierce advocate for public education for a long time, what’s your agenda for change, particularly for schools, over the first quarter?

A: “It’s actually very easy because there’s a union called the AEU with 198,000 members who work in preschools, schools and TAFES, and they’ve got a manifesto for public education.

Given that I know that manifesto was built in consultation and with the democratic participation of the members of the union, I’m going to adopt it.

Then we’re going to establish a national education summit focusing on public education, particularly equity in education. It’s going to profile Aboriginal and Torres Strait Islander education, working with the Aboriginal and Torres Strait Islander leaders of our community. It will also include the teaching profession, via the AEU, and the many academics and researchers with knowledge and experience in school funding, inequality, and the impact of compound disadvantage for students.

From that summit, we’ll set up a genuine partnership with the AEU so we can work together and develop the policy and funding settings that we know are critically important for public education, the teaching profession and the children of Australia.”

Q: You’re no stranger to working within and with governments, what would you change immediately to unleash the full potential of Australia’s public education system?

A: “I would think about what is not needed, that’s a much harder thing to do. What are the things schools should stop doing because they have nothing to do with their core mission?

In many of our schools and communities, people are so occupied with organising other things that they need help to do what they’re actually supposed to do.

I would also establish an international advisory council. We’d have the best experts from here and around the world to advise the government and the education minister on critical projects.

I was on an advisory council for the Prime Minister of Scotland and the education minister at the time said he was very grateful for the insights from his advisors because they told him the things he didn’t necessarily want to hear.

This is exactly what an independent international council can do. An independent council would mean this government could be much better prepared to do the work that should be done.”

Q: You bring years of leadership on the international stage to your job, what changes would you prioritise in the Australian education system?

A: “What would be interesting and important to do at the beginning of the administration is to really trust the professionals to lead and to do their job, and remove obstacles that get in the way of them doing that. Then we need to ensure they don’t burn out by giving them the supports they need.

This isn’t rocket science, it’s something that is documented and proven.

This new administration should, for the first time in 12 years, take part in the conversations we’re having around the world.And the prime minister should make a statement about what Australia
has learned through the pandemic, what has to change, and how we transform that.

Yes, funding. Yes, infrastructure. And people. Make a commitment to the teachers and the education workers of Australia and put the resources behind it. Stop the revolving door.

Teaching shouldn’t be something you do on your way to some other profession. Education work is a real profession and needs to be treated that way. And a global platform for a national conversation that can elevate that.”

Q: How will your government restore TAFE to its rightful place as the premier provider of vocational education in this country?

A: “Under current financial arrangements, TAFEs are working on a shoestring, only employing enough teachers to deliver what they absolutely must.

We would guarantee that a minimum of 70 per cent of all VET funding goes to TAFE. Since 30 per cent of that funding is federal, the rest goes to state and territory governments so we must ensure they do their fair share as well.

Part of that funding should be used to employ teachers and support staff in permanent positions.

Contestable funding must go. We need to allocate an annual budget suitable to operate and improve the infrastructure of TAFEs, because many campuses around the country are in very old buildings and use outdated technology.

We have a real opportunity to ensure we guarantee the right funding, that we guarantee the way apprentices and trainees, and all of our students, are looked after, and that all our teachers and staff can continue their good work.”

This article was originally published in the Australian Educator, Winter 2022