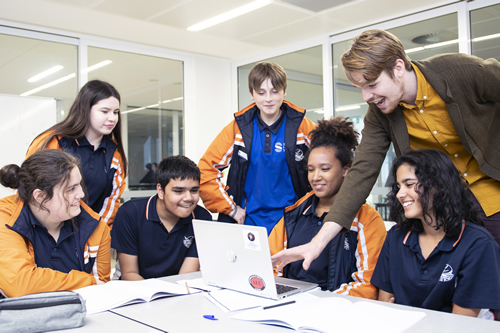 Educator and PhD research candidate at the University of Queensland Ren Perkins says he’s looked into the plan but can’t see “anything that is specifically looking at or encouraging Aboriginal and Torres Strait Islander teachers”.

Just 2 per cent of fully qualified Australian teachers, around 9000, are Aboriginal or Torres Strait Islander (Census 2016), but anecdotal evidence indicates their numbers are declining.

“I’m still undertaking the data collection for my PhD but, from what I’ve found so far, having a support structure – both outside of schools and within schools – and having mentors to encourage teachers are key to attracting and retaining teachers, especially when things get tough,” Perkins says.

A Quandamooka man from Queensland’s North Stradbroke Island, who is teaching and working on Country, Perkins says his research shows this connection is another vital element to attracting and retaining Aboriginal and Torres Strait Islander teachers.

“We are natural teachers – it’s in our DNA – it’s the way we do business,” he says. “We have a passion for teaching and a strong desire to be role models not just for Aboriginal and Torres Strait Islander students, but for all students.

“I’m really hoping my PhD research impacts policymakers and that they will listen to the voices of Indigenous teachers, who are experienced and who have contributed so much to the whole education system,” he says.

Perkins also points to the Quality Initial Teacher Education Review, released in 2021, as evidence of the widely understood need for incentives be offered to teachers in regional, rural and remote locations from diverse backgrounds.

“Indigenous teachers and education support personnel bring knowledge, lived experience and skills to schools. They are able to teach Australia’s full history, the importance of reconciliation, knowledge of Country, understanding of kinship groups, Indigenous languages, community dynamics and politics – and these lessons have implications for Indigenous and non-Indigenous students alike,” he says.

A range of initiatives and programs, that have demonstrated positive results for Aboriginal and Torres Strait Islander students should be revived under the next iteration of the National School Reform Agreement (NSRA). For example, Northern Territory schools funded under the National Partnership Agreement on Low SES School Communities saw funded primary schools make greater literacy and numeracy gains than unfunded schools.

While resources are a crucial part of closing the gap in educational outcomes for Aboriginal and Torres Strait Islander students, particularly in regional, rural and remote communities, so too is a seat at the table. Principal of Cabbage Tree Island Public School in NSW Dyonne Anderson says there is an urgent need for wider representation of Aboriginal and Torres Strait Islander voices at all levels of education decision making and policymakers need to start listening.

“So often we hear stories about how the system devalues the things Aboriginal teachers bring to the classroom. Aboriginal teachers who have been in the system for a long time say they are intimidated or made to feel worthless when they attempt to bring in another perspective, and so many of them are crushed,” she says.

“To make real, long-term changes, we need to be talking to teachers within the system, including beginning teachers, not just academics and corporate staff sitting in universities who haven’t been in a classroom for decades.

“Most teachers come from a white middle-class background so that is the lens they operate from. You don’t see the world as it is, you see it as you are. So, if you have never looked outside your own limited experience, it’s very hard to know what you don’t know,” says Anderson.

At the school level, the significant over representation of Aboriginal and Torres Strait Islander students among those who do not meet proficiency benchmarks demonstrates the continued social stratification of school education in Australia, and senior secondary completion rates suggest that for many Aboriginal and Torres Strait Islander students, school is not a culturally safe place. Cultural intelligence and the promotion of cultural safety require constant learning.

Support structures and his own Aboriginal identity are strong influences in Nuenonne man Nathaniel Golder’s first teaching job at Seaton High School in suburban Adelaide. He says role models are the key to increasing the numbers of Aboriginal and Torres Strait Islander teachers across the country.

“For me, growing up as an Indigenous person meant that I never really saw myself working in an education setting. Having strong role models is one of the most imperative things that you can ask for as an educator,” he says.

“Seeing Aboriginal people represented in school leadership roles teaches both Aboriginal and Torres Strait Islander and non-Indigenous students what it really means to be Aboriginal.”

Golder is the only Aboriginal teacher in the secondary school of 1200 students. He went to school at Kangaroo Island Community Education school, which he describes as “a very Caucasian environment with about seven or eight Aboriginal students who attended full time” and says his family history and his mixed-race background are other factors in developing his identity as a teacher.

“I’ve had to get to a point where I feel OK about expressing my Aboriginality as sometimes it’s difficult being someone who doesn’t conventionally look Aboriginal, and being the only Aboriginal teacher,” he says. “I do feel quite supported at Seaton… it’s a great environment, but the school does suffer from the same lack of diversity that most schools around the country experience.”