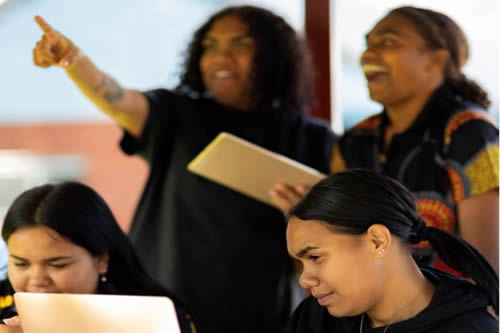 Shay and a team of researchers spent three years listening to more than 100 Aboriginal and Torres Strait Islander secondary school students in six urban, regional and remote communities across Queensland and Western Australia.

The project, Cultural Identity, Health and Wellbeing of Indigenous Young People in Schools (funded by the Lowitja Institute), involved students who were disengaged and attending school inconsistently. “Yet, when they were engaged in our project, their attendance rate increased to almost 100 per cent,” says Shay, a Wagiman woman whose family is from Daly River in the Northern Territory but who was born and raised in South East Queensland.

Shay and her co-researchers, Professors Grace Sarra and Annette Woods, also contributed a chapter to the book Indigenous Education in Australia: Learning and Teaching for Deadly Futures, which Shay co-edited with Rhonda Oliver.

She says the book is an edited collection of articles from diverse Indigenous and non-Indigenous scholars, educators and practitioners and is widely used in Australian teacher education programs.

“The topics covered are highly relevant to the AITSL standards 1.4 and 2.4. Its content is based on evidence and scholarship and complemented by practitioner stories and experiences, supported with resources and tools that teachers can contextualise for their own school settings,” Shay says.

“Change starts with schools employing more Indigenous people, at all levels, not just as teachers’ aides. And ensuring local Indigenous community members are present in schools and provided with meaningful ways of contributing to decision making,” she says.

Teachers can affirm the identities and future opportunities of Aboriginal and Torres Strait Islander young people through strengths-based approaches and high-expectations student relationships. “If teachers are not using a strengths-based approach, they are at risk of developing low expectations for all their students, including their Indigenous students,” Shay and her co-authors write.

Now, several years after the Cultural Identity project, the researchers “get to hear lots of anecdotes about the impact of listening to their students and pushing them forward as potential leaders”.

“The young people we have worked with have gone on to do some pretty amazing things after participating in that study,” she says. “One remote school has had two Indigenous school captains since the project was delivered in their school – and they had never had any Indigenous school leaders in their history.”

Shay, who has a background as a youth worker, teacher and school leader says: “We believe some of the success was because our research framed Indigenous young people as being important agents in their own lives, who had their own opinions and their own imaginings for their futures.”

“The other important key to success on this particular project was that we employed local Indigenous researchers in every community we worked with. Even though Grace (Sarra) and I are Indigenous, we ensured local protocols were honoured and that local knowledge holders led the process. We engaged local Elders to speak about the country that we were on, the history of the community, and to guide the research. The project would not have been as successful if the young people involved hadn’t seen their own local Elders, their own community members, as part of the process. Young people told us very clearly that they have strengths and capabilities, in terms of their Indigenous identities, and they want to be able to showcase them in a school setting. They also told us that they want to see themselves in the curriculum and in the school environment.

“They want to see Aboriginal interests and knowledge embedded throughout different key learning areas, not just in one discrete program. They want to see it regularly featured in classrooms and lessons and in the everyday practices of their schools.”

Shay says The Imagination Declaration, a statement launched by a group of Aboriginal and Torres Strait Islander young people at the Garma Festival in 2019, challenging our leaders to involve young people, particularly Aboriginal and Torres Strait Islander young people, in policies that affect their future, reflected her own research. She says it struck a chord and she was prompted to write about it in an article in The Conversation, which has since gained a wide readership.

The young people were supported by AIME Mentoring, an Aboriginal and Torres Strait Islander mentoring project established in 2004, and their voices have continued to be heard in schools and classrooms around the country.

“The declaration reflected the findings from our research and has continued to illustrate the power of listening to and empowering young people,” she says.

Shay says the Cultural Identity study showed the importance of acknowledging that Aboriginal and Torres Strait Islander young people have strengths, capabilities and dignities.
“We need to shift away from thinking about Indigenous education as a gap to close and see it as a framework of excellence for the future.”

“COVID obviously caused a massive disruption to anything proactive in education, understandably, but I think we will pick up some of those really important messages that came from the study and The Imagination Declaration around ensuring that we are creating space to listen to young people.

“Young people are our future. They are our future leaders. And really, we should be making explicit space for them to be heard; and to lead.”