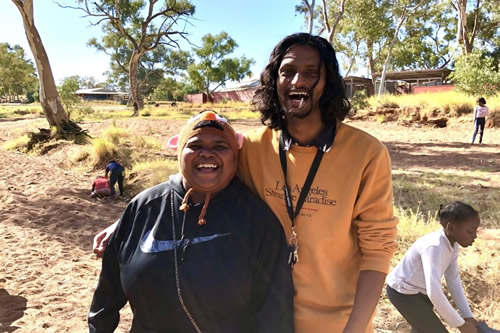 When junior primary teacher Akash Krishna was running a maths lesson to increase fluency in his classroom, he needed a breakthrough.

“My Year 1, 2 and 3 students were really struggling to count on a number line,” he says. “We’d even experimented with lines from zero to 10 and from zero to 20 and used an abacus. Some students were getting it, but everyone needed consolidation.”

So, for ideas, the Ernabella Anangu School teacher, based in South Australia’s remote An_angu Pitjantjatjara Yankunytjatjar (APY) Lands, turned to first language educator Daphne Nyaningu, who team teaches with him.

“Look to Country,” was her response, to connect the learning to something tactile and sensory based. Enter witjuti (witchetty) grubs.

Krishna and Nyaningu took the students on Country with their families and elders to collect the grubs to take back to class. “Each student had one wriggling on their palm and they had to find ways of keeping track of how many grooves theirs had. They compared size, number and length with one another. The grubs became their little number lines,” says Krishna.

In class, Krishna models mistake-making and self-correction as his students teach him their first languages.

“They flip it and I become the student and they use the same processes to teach me certain sounds in their language,” he says. He’s now become semi-fluent in Pitjantjatjara.

Krishna is following in the footsteps of his teacher mother, who worked in the APY Lands when he was young. When he returned as a teacher himself, he was able to connect with community members he’d met and known as a 10-year-old.

As a pre-service teacher at the University of South Australia, Krishna did a placement in the APY Lands, and started work there soon after graduating at the end of 2018.

A year later he gained permanency and was fully accredited by the end of last year. “Being invited to teach on the lands here is a whole other world to mainstream classrooms with differences in culture, language, community voice and pedagogical voice, plus the weather has eight seasons,” he says.

That’s why “one-dimensional forms of teaching” using worksheets or reading off a script don’t resonate with him. Krishna gives credit to the school’s former principal, Erin McQuade, for impressing upon him to respect the links between students, school, family, community and Country.

“I also give a lot of credit to Daphne. She’s worked at the school for eight years and honestly, I would not be the educator I am without her. She’s my guide, mentor, support, friend, and a future leader of the community,” Krishna says.