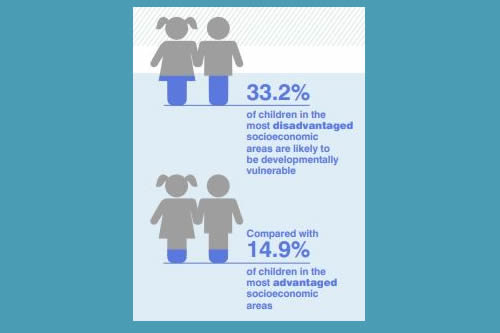 A new report has found that children in remote and outer regional areas are “significantly” more likely to experience developmental vulnerability before they start school.

More than 63,000 children were assessed as developmentally vulnerable when they started school in 2021, according to the report, Supporting All Children to Thrive – the importance of equity in early childhood education, released by independent early childhood lobby group The Front Project.

Vulnerability in very remote areas soars, with nearly one in two children vulnerable compared to one in five in major cities. Aboriginal and Torres Strait Islander children have high levels of vulnerability (42.3 per cent are vulnerable compared to 20.6 percent for non-Aboriginal and Torres Strait Islander children) and a greater percentage of children from a language background other than English experience developmental vulnerability (25.3 per cent) than children from an English-only language background (20.8 per cent).

The Front Project CEO Jane Hunt says too many children are being held back from their full potential, not because of lack of ability, but lack of opportunity and support. “While some important steps forward have been taken in early childhood education and care (ECEC) policy over the last 12 months, more work is needed to ensure Australia’s ECEC system is high quality, accessible and affordable for all families, no matter their background or where they live,” she says.

The AEDC data classifies children as ‘on track’, ‘at risk’ or ‘vulnerable’, depending on how they score in five areas of development: physical health and wellbeing, social competence, emotional maturity, language and cognitive skills (school-based) and communication skills and general knowledge.

Children who are experiencing developmental vulnerability demonstrate a much lower than average ability in at least one area. By Grade 3, developmentally vulnerable children are a year behind their peers on NAPLAN (the national literacy and numeracy assessment that students undertake in Years 3, 5, 7 and 9). By Grade 5 they are, on average, two years behind their peers on NAPLAN, the report says.

Evidence shows that these students are, in turn, less likely to finish school, and are more likely to experience unemployment and ill-health throughout their lives.

This articles was originally published in The Australian Educator, Winter 2022.