Their futures at stake 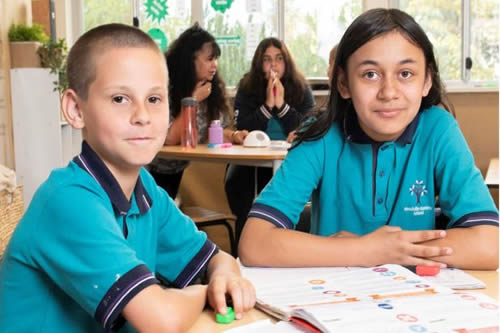 The Coalition government has systematically dismantled the concept of equity in education since its election in 2013 and its attacks on public education have intensified during Scott Morrison’s time, first as treasurer and then prime minister.

“It has been a systematic and deliberate attack by Morrison on public schools,” she says.

The Liberal Party, then led by Tony Abbott, promised during the 2013 election campaign to match Labor’s school funding “dollar for dollar” but went back on its word in its first budget, cutting $30 billion in school funding. The cuts, which largely targeted public schools, were made by abandoning signed funding agreements with the states and territories, which were part of the Gonski funding reforms, designed to improve equity in education.

By 2016, then Prime Minister Malcolm Turnbull was ready to end all federal funding for public schools, a move described at the time as “the antithesis of Gonski” by Dr Ken Boston, former NSW Education Department director-general and Gonski panel review member.

Marking the Gonski review’s 10th anniversary in February this year, Boston linked the failure to implement the review’s recommendations with Australia’s continued decline in the OECD’s Programme for International Student Assessment (PISA) test results. The PISA test measures the achievement of 15-year-olds in reading, maths and science in more than 80 countries.

“The Gonski review showed how to reduce the impact of social disadvantage on national education outcomes, so that Australia would become a high-quality, high-equity system. It proposed that schools with significant numbers of disadvantaged children should receive more public funding than other schools,” Boston wrote in an editorial for the schools funding conference: Why money does matter.

Turnbull did not succeed in abolishing funding for public schools, but the notion of equity in education became moot.

More than $22 billion was cut from planned public school funding for the decade to 2027 in then-treasurer Scott Morrison’s 2017 budget. (Later reduced to $17 billion during robust Senate negotiations.) Next, the Turnbull government revoked signed agreements with five states and territories, and refused to deliver the final two years of school funding in 2018 and 2019.
It also decided to end funding for capital works in public schools.

Scott Morrison had barely warmed the seat in the prime minister’s office before he delivered an astounding windfall for private schools.

Less than one month after taking the top job in 2018, Morrison announced a $4.6 billion 10-year deal for private schools that included a $1.2 billion Choice and Affordability Fund designed to “address specific challenges in the non-government school sector, such as supporting schools in drought-affected areas, schools that need help to improve performance and to deliver choice in communities”.

A few months later, his government negotiated new funding agreements with states and territories that locked in disadvantage for public schools.

The Coalition has legislated an SRS funding cap of 20 per cent for public schools, expecting states to make up the difference. Meanwhile it hands over 80 per cent of the SRS to private schools.

In a further blow for public schools, the agreements allow the states and territories to claim a 4 per cent capital depreciation tax on their funding to public schools, reducing effective funding by an extra $2 billion per year by 2027.

By the time the agreements expire at the end of 2023, the total recurrent funding shortfall for public schools will total $19 billion over the four years from 2020, says Haythorpe.

“Scott Morrison has entirely failed public school students, their parents and staff with this shocking outcome,” she says.

Gross inequalities in public school funding for teaching and learning resources are exacerbated by the urgent need for high-quality school infrastructure to provide safe and comfortable learning environments for students.

The Morrison government’s blatant favouritism towards private schools was once again on display when it discontinued the provision of capital works funding for public schools in 2017, leaving the states to cover the cost. But it made sure that private schools had enough to fund their ambitious building programs – promising $1.9 billion from 2018 to 2027.

During Morrison’s almost four years as prime minister, his government has provided more than $560 million to private schools from this special building fund.

Private schools were already ahead in the funding stakes. Investment in private school facilities was at least double that of public schools per student per year in the decade to 2018 and, in some years, more than four times higher, according to a 2021 report by economist Adam Rorris, Investing in Schools Equals Funding the Future.

For every dollar invested per child in a private school, a public school student would receive between 27 and 50 cents, Rorris said.

In 2019, the federal budget included a few crumbs for public schools in the form of an election-campaign driven Local School Community Fund. The one-off allocation of $30.2 million to be shared by all of Australia’s 9542 schools – public and private – was distributed by local MPs. Each school received just over $3000 to spend mainly on furniture, shade sails and playground equipment.

It was an “insulting and cynical” act, says Haythorpe, that had no chance of meeting schools’ needs.

A few months after winning the 2019 federal election, the Morrison government rewarded the private school sector with another special fund: $10 million to help schools facing financial hardship caused by the drought. Twelve months later the amount was doubled.

The then education minister Dan Tehan said the funding would address “the impact on parents of drought and worrying whether they’ll … be able to continue to afford to send their children to school” and “the toil and hardship parents suffer paying school fees”. No mention was made of helping parents of public school students who were also suffering because of the drought, nor of the public schools that serve those regional communities

But the drought assistance fund was small change compared with what was to come.

To lessen the blow, the government has set up a $3.4 billion fund to be distributed over 10 years. This means that some of Australia’s richest private schools, which hold hundreds of millions of dollars in assets and surpluses, will receive an additional $200 million from the federal government.

The law also includes provisions that enable the government to rule by regulation, allowing additional funds to be distributed to private schools at the discretion of the minister.

The COVID-19 pandemic has seen an escalation in the Morrison government’s largesse to private schools.

In 2020 private schools were offered early part-payment of their annual funding, bringing forward 25 per cent of total annual recurrent funding in exchange for committing to reopening schools for physical on-site learning at the start of Term 2. The funding was paid whether or not the schools were experiencing liquidity issues and there was no monitoring to check that schools complied with the deal.

Since then, private schools have received even more funding:

The Morrison government’s dodgy funding deals for the private sector have not gone unnoticed.

An Australian National Audit Office (ANAO) review found that the education department had failed to adequately monitor whether school funding had been allocated, used and distributed in accordance with legislative requirements.

The ANAO report, published in June 2021, also concluded that the department’s approach to assessing the impact of school funding on educational outcomes was not fully effective.

The report found that many recommendations from a 2017 ANAO review of schools funding have either not been implemented or were partially implemented by the department.

Haythorpe says the ANAO report is evidence that the prime minister is not to be trusted.

“You can’t rely on him to nurture, protect and support public schools. He’s intent on bolstering the private sector at the expense of the public school sector,” she says.

“As we go to the polls, we need a government that will be true to the Gonski recommendations and address the inequity that has become deeply entrenched for public schools and their students under the Morrison government.”