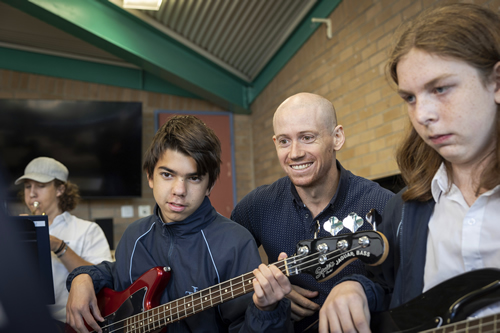 Research has demonstrated that a quality music education has a positive effect on a child’s learning and social development.

Yet as arts subjects – particularly music – are increasingly sidelined, many students are missing out.

Maurie Mulheron from the Centre for Public Education Research points to results from Champions of Change: the impacts of the arts on learning, a US government study from 1999 that he says is still relevant more than 20 years later.

“It showed that if you can engage children in quality music education – learning to read music and play an instrument, taught by a professional music educator – the social, economic and educational outcomes are far in excess of children not given those opportunities,” says Mulheron.

Social indicators such as employment, relationships and mental health were also shown to rise exponentially for children with intellectual disabilities and those from disadvantaged socioeconomic backgrounds in low-SES schools who learned music.

Reading music and playing instruments hastens the development of “executive functions”, says Dr Anita Collins, a researcher and writer in the field of brain development and music learning. These skills assist planning, problem solving and resilience and can be low in children who grow up in challenging circumstances, says Collins, an adjunct assistant professor at the University of Canberra.

Collins says that even teaching children to clap to a beat and recognise changes in rhythm can improve their fine and gross motor skills and create a body-brain connectivity. She believes this leads to “higher-level learning” and is key to raising levels of literacy and numeracy.

“My work is about helping people connect the dots between music and all other learning, so they understand that it develops the whole child’s brain, and that’s the foundation for the rest of their learning,” says Collins.

Whistling in the dark

While music education is part of the Australian curriculum, it’s definition and practice can vary considerably between states, says Dr Rachael Dwyer, an educator and researcher at the University of the Sunshine Coast, who collaborated with Collins to evaluate the importance
of quality music and arts education for
a 2019 report, Music Education – A Sound Investment, commissioned by The Tony Foundation.

Rolling out more and better music programs means convincing cash-strapped schools and education departments of the benefits. Dwyer says we have the knowledge, skills and expertise, but we need significant, sustained investment.

“That includes teacher education; building a cohort of people paid to undertake the training and who are prepared to live not just in cities, but regions and rural and remote areas.”

Collins likes to use a business lens to advance the case for music education.

“If we put in a music program for every child from K-2, we know it’s going to help their language acquisition and development, so fewer children will need literacy support,” she says.

“It’s the same for how much time teachers spend dealing with kids with poor executive functions. Time is money, so there is a cost-benefit if we invest early.”

It’s not unusual for professional musicians to choose a second career to fall back on. For Evan Wilkins, teaching became the just-in-case solution to guarantee a more consistent living – if or when gigs and private tutoring dried up. But it gradually grew into a full-time passion.

“I was still kind of going with my music career when I trained to be a high school teacher, so I didn’t want to commit to a full-time position straight away,” says Wilkins.

He started off as a casual, working two days a week “just to see how it all panned out”. Two days gradually turned into five, and within four years he went from teaching seven to 14 classes a week.

Now in his eighth year as full-time music teacher at The Jannali High School in southern Sydney, Wilkins says that of all the types of teaching he’s done, he believes music to be the most therapeutic for students, especially those in their younger years.

Apart from the simple pleasure of moving to rhythm, learning basic instruments helps develop fine and gross motor skills, he says. And because learning music is like learning another language, Wilkins says it enriches proficiency in areas of learning such as short-term memory.

There’s a new vocal group and an established school concert band that offers students two days of specialist tutoring each week, then group rehearsals with a band master to put it all together.

“We incorporate a lot of technology as well, to keep up the kids’ interest and to make music education more relevant to the 21st century,” says Wilkins.

Classes go beyond the Western canon too and explore music from other countries and Indigenous cultures.

Wilkins thinks that learning the fundamentals of music from an early age prepares students for the opportunity to further their education with elective courses or lessons outside of school.

With this solid grounding, he says, “they’re already a cut above the rest”.

Before Alison Pennington became a senior economist at the Australia Institute’s Centre for Future Work, she taught music at Grange Primary School and Woodville High School in suburban Adelaide.

“My parents were folk artists who played in bands, so music was part of our community. It was how we expressed the experience of life, the struggles,” she says.

Pennington picked up the flute in primary school, through a state-sponsored public schools music program that offered free lessons and affordable instrument hire. She was accepted into Woodville High School’s special music program, where she segued from flute to voice and fell in love with jazz.

“I developed a strong appreciation for improvised music and that handballed me into the next part of my life.”

While studying at Adelaide's Elder Conservatorium of Music, Pennington was offered a short-term vocal and choral teacher role at Woodville High.

“I benefitted so much from public music education. Giving back was part of closing the loop and what music is all about," she says.

“There’s a strong relationship between the discipline and the focus you harness in music, and the voice you develop. You become an agent in the world, rather than someone at the mercy of conditions you can’t control.”

She says her music education has helped her overcome many obstacles in life.

“Providing a space for young people to express themselves, and to connect, is one of the most important ingredients to navigating disadvantage. Becoming a musician isn’t going to pay the bills, but it gives you the tools you need to navigate the world.”

While music remains a major influence, Pennington is also motivated by economics. Both disciplines are creative, she says, “like flowing rivers intertwined”.

“The job of an economist is to absorb and reflect on the complexity of life and produce analysis that helps people make sense of that complexity.”

This article was originally published in The Australian Educator, Winter 2022