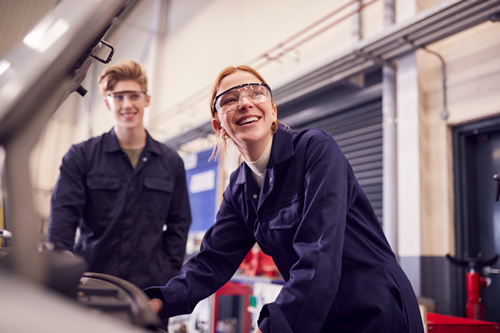 Infrastructure Australia is projecting approximately one in three jobs in public infrastructure is going to remain unfilled over the new few years, so there has never been a better time for women to consider a career in construction –
or for government and industry to look at breaking down their barriers to participation.

We’ve endured months of promises from both political parties who have invested time organising photo shoots and dressing up in high-vis vests to announce billion-dollar projects, but rarely did they speak about the vital role that TAFE will play as part of the infrastructure project and the need
to encourage more women to enrol in TAFE courses.

Tradeswomen Australia, which works to improve gender equality across the trades, has undertaken research to identify the barriers that limit women’s participation as apprentices/trainees in the non-traditional trades, especially the core trades of construction, automotive and electrical, where their representation remains below 2 per cent and has changed little over the last 25 years.

The three major barriers to increasing women’s participation in the trades are:

Tradeswomen Australia CEO Janet Cribbes says women's lack of participation isn't because they don’t want to go into trades. “The average salary for a career in trades is $80,000, and for many women this can be a life-changing opportunity,” she says.

There’s no point announcing big contracts only to discover that it takes thousands of workers that are not trained up and ready to do the jobs and finding the project is at risk.

The Victorian Government has recognised this opportunity and it is taking steps to address structural support systems with its Free TAFE investment and a wage subsidy aimed at women.

There are more than 250,000 single parents in Victoria – around 80 per cent of those are women. They all face more challenges than most heading back to work or increasing their hours, often carrying the lion’s share of caregiving.

Single mum Chelsea Hinds, 29, was one of those parents who lost her job as an apprentice carpenter in December 2020 because her boss could no longer afford to keep her on the books when the pandemic hit.

“The wage subsidy means that I can pursue a career in construction while still prioritising my son, who means the world to me. It’s a great initiative that I hope encourages more people to hire single parents,” she says.

While Chelsea continued to look for work, she kept up the theoretical side of her carpentry apprenticeship and in November of last year through the wage subsidy scheme, she was offered an apprentice joiner position with Kubale Constructions based in Warragul.

Chelsea is now on track to complete her carpentry and joiner apprenticeships at Gippsland TAFE and pursue a long-term career in the construction industry.

Fully qualified tradies take years to educate and investment needs to be made now in the TAFE teaching workforce to make sure that they receive the best education.

This article was originally published in The Australian TAFE Teacher, Winter 2022