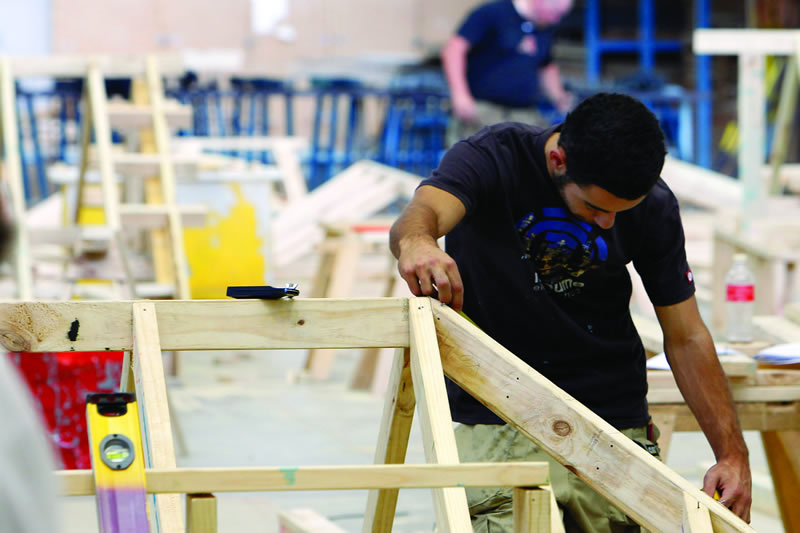 This article is part two of a two-part series. It focuses on the policy trajectory that created a national training framework, a ‘training market’ and the introduction of VET FEE HELP and looks at how these policies brought TAFE to near ruin.

Increasing participation in education in Australia, both at the school and at the tertiary level represents a dramatic social and cultural shift. This occurred in the late 1980s early 1990s and these statics from Victoria illustrate the magnitude of the changes. The apparent retention rate to Year 12 increased from 47% in 1986, to 81% in 1992 before declining to 79% in 1993.

For TAFE, this period also involved significant change. More closely aligning TAFE offerings to the economy and labour market, and the introduction of competency-based training (CBT) redefined TAFE teaching and learning.More aligning of the nation’s economy with education, and training for skills development was progressed by the Federal Minister for Education, in the Hawke Labor government (1983-1991). The Hawke and Keating federal government (1983-1996) undertook broad ranging macro and micro economic reforms that transformed the Australian economy and society. These changes also included changes to TAFE, universities and schools.

While the 1970’s can be viewed as a time of reforming secondary schooling, the 1990s involved far reaching reforms of post-school, tertiary education in Australia. Universities underwent significant reform as did TAFE. Reforming universities focused upon creating a unified national system where former Colleges of Advanced Education, Teachers Colleges, Printing and Textile Colleges and Pharmacy colleges were transformed into universities.

TAFE on the other hand was reformed to become more industry oriented through the creation of national industry standards. Up until that point, TAFE operated with state based, industry informed, knowledge based curricula.The change would involve national industry designed qualifications known as training packages that would replace curriculum.

A policy platform at the time, Australia Reconstructed, established a new body to consider national skills needs. The National Board of Employment, Education and Training (NBEET) was formed with a partner agency called the Employment Skills Formation Council (ESFC). Together NBEET and the ESFC inaugurated, industry advisory arrangements to determine the delivery of what was to become known as Vocational Education and Training (VET). This shift from a focus on TAFE to VET was a reorientation of TAFE.

While TAFE was the key state and territory government owned public provider, it would not from then on, be the sole or only providers of skills development. The notion of a training market was a key feature of the policy direction for VET, which has had continuing ramifications for how TAFE operates today.

When Paul Keating assumed the Prime Ministership in 1992, he set about establishing the Australian National Training Authority (ANTA) as a statutory authority with the mission of forming a more consistent national Vocational Education and Training (VET) system. The States and Territories formally recognised the national leadership role of ANTA through their own legislation, which established their own VET systems as the ‘State Training Authorities’ under the ANTA agreement.

In this country, approximately 40 per cent of secondary school students go to tertiary institutions. …..what were we to do with the other 60 per cent of kids, many of whom often cascaded into nothing? The answer was for the Commonwealth to involve itself directly in funding the growth of TAFE.

While TAFE has an important educational role in a changed Australia, its capacities have been hampered. As a result of the reforms of the 1990s, industry was handed the central policy role in Australian VET and TAFE, meaning that communities, so vital in the earlier establishment of TAFE in the 1970s were left out.The advent of a more marketised sector with the addition of student fees would further exacerbate damage to TAFE and its relationship to its communities.

In the 2000s a new way for considering and remaking TAFE/VET was premised upon a loosely defined set of ideas called ‘market design’.Moving past notions of processes between governments and industry that characterised ANTA, market design was about designing and setting the rules of exchange between consumers and providers. The rules of the game, if you like were the focus of market design in order to get the right outcomes.

At the time it was thought with good market design, governments could harness market forces by setting incentives and accounting for risk. In crude terms, market design reduced education provision and the activities of TAFE to the structure of buyers and sellers within this new policy paradigm.

In this paradigm of market design a TAFE institute was not conceptualised as significantly different from a private provider. Debates about public versus private in this paradigm are considered irrelevant.

As part of this policy approach contestable funding connected to student training entitlements was rolled out differently in different states and territories. In real terms what this paradigm of market design would mean for TAFE would be shaped by the particular state and territory government approaches to what has become known as student training entitlement schemes.

VET FEE HELP first introduced by the Howard Liberal national coalition government in 2007 introduced a new model of financing VET and TAFE provision. In the 2012, the National Partnership Agreement on Skills Reform extended the use of VET FEE Help in the demand driven contestable market design approach to VET. By 2015, all states and territories had introduced a student training entitlement scheme.

TAFE was sidelined as the key public institution in this policy wave of industry-led and then market design. Market design, through student entitlement schemes resulted in student entitlement approaches to financing whereby states and territories in effect shifted cost onto students through federal government financed income contingent loans.

Allocating resources directly effects the viability and quality of education offered and experienced. TAFE, up until the late 1990s was buoyed by reasonable investment by state, territory and federal governments. This reasonable investment occurred through the recognition of the importance of TAFE.

TAFE today needs to be remade to do more than just be a ‘provider among other providers’. ACOTAFE made TAFE central in communities as an important educational resource to support individuals, communities and businesses and companies deal and cope with a changing world. This vision encapsulated in ACOTAFE in the 1970s needs to be equalled with a renewed vision as we enter the third decade of the twenty first century.

TAFE must reengage with communities and connect with industry and enterprises in different ways to previously through ANTA. This is necessary to build curriculum responses that do not hollow out solid educational response.

The industry lead system that underpinned this approach as progressed by ANTA, needs to give way to more localised industry informed curricula approaches to underpin a TAFE education that redresses social, technological and economic change.

The role of TAFE in Australia differs from that of other VET providers. TAFE has a responsibility to the public and the communities where it resides. The challenge for TAFE today in the current competitive education and training market context is to differently reinvent and religitimise its place.

The reinvention, or more precisely remaking of TAFE, needs to occur in a policy climate that goes past a preoccupation with income contingent loans and financing. In the second decade of the twentieth century more students are staying on to complete secondary schooling. But not everywhere. Country students, and those in remote locations, are less likely to complete school, as are children from economically disadvantaged households. Indigenous children are also less likely to complete secondary school. Women, migrants, and those who have been retrenched because of technological changes need TAFE to reorient and adjust through learning for different and new forms of work.

The teaching and learning experiences that have made TAFE what it is are not replicated or reproduced in secondary schools or universities. TAFE institutionally has always been more than a ‘provider’ subject to poorly conceived policy.There is need for national agreement about the role TAFE has in each state and territory in guiding a broader VET system. The industry advisory arrangements progressed through NBEET and then ANTA and ITABS divested significant education funds away from direct education delivery, with relatively minimal improvements in quality. Investing funds back to TAFE through states and territories to ensure industry informed TAFE offerings will move some way to redressing the imbalance that has occurred for TAFE education.

Only by remaking TAFE, in ways that move past previous policy precepts will we inaugurate a new era in TAFE provision. What needs to be central to a new policy imaginary is TAFE as an institution that is not residual to schools or universities but one where the institutional vision is about communities and industries adjusting to changes, both foreseen and unforeseen is front and centre.