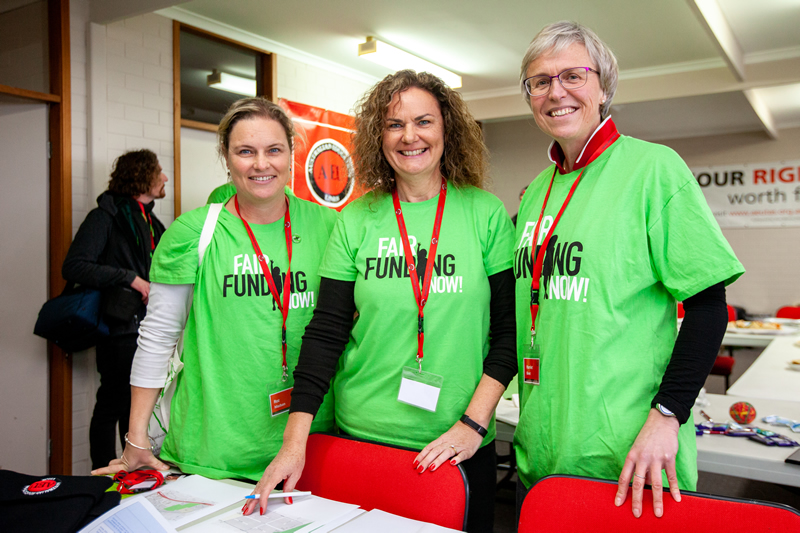 Educators, parents and community supporters across Australia are working tirelessly on the Fair Funding Now! campaign. Five activists tell us what drives them.

Henry Crofts has been active in the AEU since he joined as a graduate in 2008. He was dismayed by what he saw while teaching in the United Kingdom for three years and is worried Australia is headed down the same path.

“I’ve worked predominantly in schools with lower socioeconomic demographics, in which existing
funding models punish the children through a general lack of funding.

“There’s still a discrepancy between the haves and the have nots, which creates an inequitable playing field for students who are victims of circumstance. They don’t get to choose how much money their parents earn, or the postcodes that they live in.

“Through the Fair Funding Now! campaign I’ve been involved in a lot of activities, from chatting on local radio to travelling to Canberra to lobby our local Federal MP Sarah Henderson, the Liberal member for Corangamite. She refused to meet us, but Adam Bandt, the Greens member for Melbourne, was quite receptive.

“At the local level, I talk about the Change the Rules and Fair Funding Now! campaigns to parents out the front of the school, or chat to people at train stations. I do door-knocking as well, when I’ve got time.

“It pays to be as active as possible because you meet like-minded people. Teachers tend to be passive and avoid conflict, because they’re nurturing sorts of people. And as a profession, they put up with a lot and just seem to take it on the chin.

“But any little conversations I can have about investing in education makes a difference. And being an active union member is about trying to protect the enjoyment of my employment because the job gets more demanding every year, and you’re expected to do more with less.

“At my school, for example, the equity funding we received last year was used for speech pathology and early literacy intervention. It makes a difference to children with learning difficulties or those who fall between the gaps and sometimes need extra support, because they’re more literate by the time they get to the older year levels.

“With projected funding we could employ two more people to provide literacy intervention or speech pathology services for incoming preps. But cuts mean we’ve had to halve (and halve again) access to those services. It’s now at a point where I can’t offer students the support they need. It’s so valuable, and it’s heartbreaking to tell a parent that the service their child had last year isn’t available anymore.”

David Reynolds advocates for the Fair Funding Now! campaign with his colleagues every Saturday at a stall in the local town market, taking what he calls a “soft-sell” approach.

“I’m the NSW Teachers Federation representative at my school and they needed someone to fill in at the market, so I put my hand up.

“It’s our main activity and we get great engagement from the local community. We invite people to talk with us and hand out information – letters and brochures.

Our latest material outlines how much funding each local school will lose or is losing under the current arrangement, compared to how it would be under Labor.

“It’s a very soft-sell approach, because we have to be sensitive to the market – people shopping don’t want us getting in their faces. And we’re aware that by just being there, we’re an advertisement for the teaching profession.

“When they ask what we’re selling, we jokingly say: Edutopia, the educational dream. But it’s just a fantasy.

“Another part of my advocacy is being president of the Moruya Teachers’ Association, which includes Moruya High School, Moruya Public School and Broulee Public School. Those schools could all do with more funding, particularly for more support staff.

“We have a lot of kids, and half are in the disability area. They require a lot of support, and if funding gets cut, they really suffer.

“This year we’re going to the markets each month, especially once the election is called. I’m really committed to it because just by
being there I’m basically a talking billboard. If people want to ask a question they can.”

Chris Guinane has been a union rep since graduating. He became heavily involved in the Fair Funding Now! campaign last year and joined the AEU Victorian branch council.

“As well as being a member of the AEU, I’m a member of the Labor Party, and this is my first experience being part of a broader campaign. I wanted to get a taste for campaigning that’s not as party-based.

“The issue that drove me most to join a political party was education and funding for state schools. Last year I took part in the Fair Funding Now! campaign by attending meetings and speaking at a campaign launch, where I ran through what my school missed out on with Gonski 2.0.

“I’ve spoken to community groups and to the school council about getting involved. It’s all well and good for teachers to become more active with campaigns, but we need to get parents and other community members engaged as well.

“Special education is the sector I’m most familiar with and I know that any cuts in funding really affect our staffing numbers.

“Additional funding would allow us to put in more staff where they’re most needed and broaden access to auxiliary staff such as speech pathologists and occupational therapists. It would help us build a more successful program for kids struggling to get through their education.

“The funny thing is, a lot of our complaints about schools go back to not having the money to do what we want to do for the kids.

“That’s my pitch: the money is there. It’s just not being given to public schools purely because of ideologically driven governments.”

“I’ve been going to monthly NSW Teachers Federation meetings, but mostly I’ve been leaflet dropping and being annoying on Facebook, posting correct information about the education department, fair funding, teaching – all those things.

“My message is that everyone should be able to access a good education no matter what their postcode or how much money their parents earn. More broadly, I find great inequity in schools and the gap is widening.

“In special education we lack resources. In 2017, my classroom budget was $200 for textbooks and other resources. But when students don’t come to school with food, you can’t expect their parents to purchase pens and paper.

“Those resources usually came out of my pocket, and last year I spent almost $500 that wasn’t reimbursed by the school. That didn’t include purchasing food every day for kids who haven’t had anything to eat.

“Because sometimes the only way you can get through a morning is to make sure that you’ve got bread and cheese and butter, probably the only food they’ll have all day. Even if I’m only spending $20 a week on food and stuff for these kids, it’s a lot over a year. And you can’t claim that back on your tax.

“Funding makes a difference to kids in special education. They often end up in a demountable in the middle of a field and yet they’re expected to feel valued within the school environment.

“When I was at Nowra High School there were demountables that had been on campus for at least 12 years, and they can be quite dangerous. Inadequate or non-existent air-conditioning is common, as are leaks that produce toxic mould and send water running down through the light switches and power sockets.

“When you look at the additional millions being given to private schools by the government, no wonder they’re far ahead of the game. It’s unfair and it makes me angry.”

Tracey Hopgood became an active member of the school council a few years ago when she realised that as a parent, she wasn’t always aware of everything going on.

“I found being on the school council eye-opening. It taught me a lot more about how schools run, how they have to deal with their budget and where money comes from.

“Then, around the middle of last year, a representative from the teachers’ union came along and explained they were going to Canberra to rally for the Fair Funding Now! campaign. They were looking for parent representatives and I thought, ‘Well, I’m quite interested in that’.

“It was about broadening my understanding of what I could do to help my school, in particular, and hopefully lots of other schools. I’m not the type of person to sit back and say, ‘I’d like this, can you all sort that out for me?’

“I believe that if you want positive change, you need to be part of that change.

“The crux of the whole campaign – the idea of fair funding – we’re seeing that on the ground. It was hard not to get emotional in Canberra, because Frankston is quite a diverse area with million-dollar houses and commission houses crammed together. So, some schools have tennis courts and inground pools, and others have students without decent shoes, who can’t afford books or excursions, and who haven’t eaten.

“I’m one of many parent representatives on our school council, and I think we have more now than in previous years. While other schools have an enormous amount of luxury, we’re wondering how we can help get breakfast for kids. But we have managed to fund an extra school bus, which makes excursions cheaper.

“My second child is at the end of her schooling now, so any positive change that comes from my activism won’t really affect her. But I know what the schools need, I’ve got a better idea of what the kids need and how fair funding will affect the children coming through. That matters to me.

“I was happy with the results of the recent election in Victoria because the government is spending money in all of the schools, whereas the opposition party was focusing on schools that already have a lot of money. As a parent, that doesn’t make sense. All of our children are important, not just a handful.”