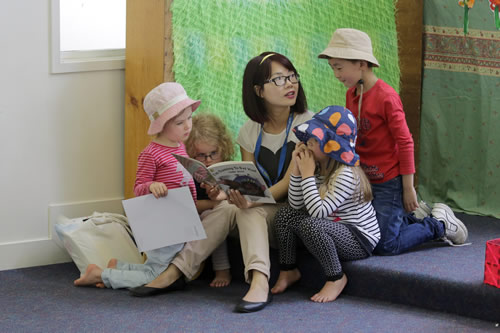 The case for preschool education has never been greater, but to those who are trying to plan and run services, it seems everyone is listening except the federal government.

Now AEU members are telling federal Coalition MPs that it’s time to step up and end the hand-to-mouth cycle of annual funding for four-year-old preschool.

It has been 10 years since universal access to 15 hours a week of preschool was introduced for every Australian child in the year before primary school, and seven years since the Coalition came to power, yet Canberra still funds its share just one year at a time.

The Commonwealth meets one third of the cost of the guarantee under the Universal Access National Partnership with the states and territories, but since the Coalition was elected in 2013, federal funding has rolled over only annually.

The AEU has joined forces with stakeholder groups across Australia to lobby the federal government for an ongoing commitment – armed with the recommendation of an official review that funding be guaranteed in five-year blocks – to give parents and providers the security to plan ahead.

Delegations of members across the country have begun meeting their MPs to lobby for ongoing funding and, in March, stakeholders will join AEU members at Parliament House in Canberra for a day of lobbying.

“At the moment, it’s Groundhog Day,” says AEU federal president Correna Haythorpe. “Each year has seen the federal budget announce a single year’s funding. We have funding to the end of 2020 and that’s it.

“We have a national partnership; we’ve had over a decade of funding and we need the government to stump up the cash.”

The meeting’s communiqué described preschool as “critical in giving every child the best possible start in life”, while the Alice Springs (Mparntwe) Education Declaration recognised it as “the foundation for learning throughout school”.

The meeting received the interim findings of a review of preschool funding conducted for the council by the independent Nous Group.

According to Nine Media reports, the review warns of “immediate and longer-term consequences” if the Commonwealth fails to move beyond its annual funding cycle.

Funding uncertainty was “real and important”, the report said. “The review’s overarching finding is that to sustain and further build on progress, funding should continue at a minimum of current levels.”

The Coalition has had to be dragged to the table on preschool funding since its election in 2013. At the five-year review of the national partnership in 2014, it complained that there was no strong evidence at the time of the benefits of universal access.

That argument can no longer be sustained – the Nous Group’s preliminary findings “suggest the [national partnership] has been successful in achieving its objectives,” according to the Education Council in its December communiqué.

However, providers and stakeholders now fear the Commonwealth is trying to shuck responsibility for funding onto the states and territories. After last year’s budget, Treasurer Josh Frydenberg argued that delivery was “primarily the responsibility of the states”.

The Government has also tried to divert attention with complaints of lower levels of participation among disadvantaged and Indigenous communities. The Liberals’ 2019 election manifesto claimed that 34 per cent of disadvantaged children and 41 per cent of Indigenous children were not accessing their 15-hour-a-week entitlement.

Funding uncertainty makes it harder for services to draw in harder-to-reach groups. The AEU says that it’s only the federal contribution that ensures a level playing field for every child.

Haythorpe says cutting funding would result in inequality of access and opportunity across the country, with communities and families divided into haves and have-nots of early learning.

“This is an issue that’s felt widely and deeply across the sector,” Haythorpe says. “Funding shouldn’t be left to the states and territories. It’s a joint responsibility of the Commonwealth and the Commonwealth must contribute its share.”

Despite the funding uncertainty, the federal government has approved full funding for the Australian Children’s Education and Care Quality Authority (ACECQA), and the Education Council is working on a new national workforce strategy and a review of the national quality framework – the architecture underpinning universal access.

That should include “significant new investment” to ensure every child could access two years of preschool; better support for Indigenous and disadvantaged or vulnerable children to attend for the 600 hours a year to which they were entitled; and an improved child care subsidy to support access.

The Mparntwe Declaration says the 15-hour guarantee “provides a solid foundation for development and learning, and we need to build on the success of the collective efforts of governments and stakeholders to ensure sustainable ongoing outcomes”.

Another 12-month rollover of funding from Josh Frydenberg will directly undercut that commitment. The Coalition has happily shrugged its shoulders and washed its hands of issues from stagnant wages to climate change and bushfires. Will preschool education be next.

This article was originally published in ‘The Australian Educator’ Autumn 2020