The Economic and Social Benefits of the TAFE System 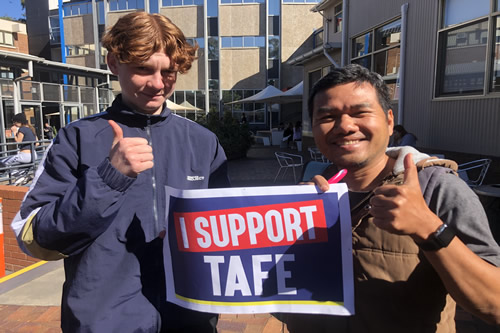 Despite chronic underfunding and failed market-led VET policies, Australia’s historic investment in the TAFE system continues to generate an enormous and ongoing dividend to the Australian economy.

The direct operation of TAFE institutes results in over $3 billion in additional economic activity in Australia each year, including around $2.3 billion in wages, salaries and other employment benefits paid annually. Purchases and supply chain inputs associated with TAFEs extend and multiply this impact on the broader national and regional economies, generating another $1.6 billion per year in ‘upstream’ economic benefits. Counting indirect jobs in the TAFE supply chain, a total of $3 billion in employment incomes is generated by TAFE institutes each year. In turn, that income translates into an additional $1.5 billion in incremental consumer spending on Australian-made goods and services. Including the direct activity of the TAFEs, its supply chain, and ‘downstream’ consumer spending impacts, we estimate that a total of over $6 billion in economic activity, supporting 48,000 positions (directly and indirectly), is generated by the presence and activity of Australia’s TAFE institutes.

Students who complete VET qualifications with TAFE institutes move into the labour force with skills that generate higher earnings compared to the earnings of workers without post-school qualifications. Employees and owner-managers with VET qualifications (including Certificate I/II/III/IV, Diploma and Advanced Diploma) receive a wage premium of 39% compared with those whose highest educational attainment is Year 12 or below.

In addition, a more skilled workforce yields significant productivity benefits to employers, as well as higher tax revenues for government. The total annual benefit that the TAFE system generates thanks to its accumulated contribution to the skills of Australians is estimated at $84.9 billion. Some of this is paid in higher incomes to workers; some of it is captured in higher profits by employers. And some of it is paid in incremental taxation revenues to government, which we estimate are worth $25 billion per year—several times more than governments currently allocate to the cost of running the entire TAFE system.

After training TAFE graduates are more likely to be employed, and less likely to be unemployed, than workers with less training. Moreover, with increased access to skilled workers, industry can expand production and employ more people, increasing total output across the economy. We estimate the TAFE system has increased the employability of the VET-educated population, relative to those without post-school education, resulting in an increase in employment of around 486,000 positions.

The TAFE system increases employability, thereby lowering unemployment and supporting a healthier workforce and society. An important consequence of this is reduced social assistance and public healthcare expenditures. We estimate the annual value of reduced social expenses at some $1.5 billion per year ($1.2 billion in reduced welfare and $289 million in reduced health costs).

The total annual benefit (driven by the accumulated historic and current investment in the TAFE-trained workforce) is estimated at $92.5 billion. That represents around 4.5% of Australian GDP. Those benefits can be traced back to the extra employability, productivity and incomes (and associated savings on social benefit costs) demonstrated by the TAFE-educated workforce.

The substantial economic benefits supported by the TAFE system do not tell the whole story about the importance of TAFEs to our all-round economic and social well-being. The TAFE system also underpins a wide range of broader social benefits that are harder to quantify. For example, TAFEs promote stronger economic and labour market outcomes in regional areas. They help ‘bridge’ access to further education and jobs pathways for special and at-risk groups of young Australians. They ensure greater social cohesion, and help to reduce crime. TAFE students are more likely to come from the lowest quintile of society according to socio-economic disadvantage, more likely to be Aboriginal or Torres Strait Islander, and more likely to identify as having a disability compared with students of private VET providers or universities. All these features confirm that TAFEs are critically important in addressing systemic inequality in Australia’s economy and society.

Compared to the preceding inventory of direct and indirect economic and social benefits, the costs of operating the TAFE system are modest by any measure. The costs of operating the TAFE system accrue to governments, students and employers in the delivery of vocational education through TAFE institutes. We estimate the combined costs of the TAFE system—including government funding for training and administration, employer and student assistance, loans and income support payments, student fees, and employer apprenticeship and traineeship training costs—at $5.7 billion per year. That represents only about 0.3% of Australia’s GDP.

The TAFE system has made a leading, decades-long contribution to training and skills in the Australian economy. On the basis of historical enrolment data, we estimate that 72.5% of Australian workers currently holding VET qualifications received their training through the TAFE system. Hence, Australia’s historic investment in quality public vocational education generates an enormous and ongoing dividend, in the form of the enhanced productivity, higher earnings, increased tax payments, and reduced social benefit costs associated with those workers. This is a valuable and continuing payoff to the funds that were invested in TAFE s: both now and in the past.

There is no doubt that the benefits of TAFE education to individuals, employers, the government and wider society far outweigh the costs. As noted, the combined annual costs for operating the TAFE system’s 35 institutes last year were modest—$5.7 billion. In contrast, the annual economic benefits generated thanks to investments in TAFE-provided training were estimated at $92.5 billion. In other words, the flow of annual benefits resulting from the present and past operation of the TAFE system exceed the current annual costs of operating that system by a factor of 16 times. The increased tax revenue generated through the operation of TAFE is $25 billion annually, and this alone is more than four times its total cost.

Keep in mind that the flow of these economic benefits resulting from a better-skilled workforce is the legacy of Australia’s historic commitment to high-quality public vocational education. But that commitment has been undermined in recent years by reductions in fiscal support for public VET, and failed policy experiments with privatised, market-delivered, but publicly-subsidised VET programs. As a result, the flow of economic benefits generated by well-trained, better-paid VET graduates is in jeopardy today. Australia is not replacing its stock of high-quality TAFE graduates – which means that over time, that flow of economic benefits will inevitably decline. Reported problems encountered by many industries and employers in recruiting and retaining adequately-skilled workers in numerous occupations attests to the growing costs of Australia’s underinvestment in reliable, publicly-delivered VET.

Imagine a well-built house: it generates value each year that someone lives in it. But if the house is not maintained, and its structural integrity assured, then that flow of benefits will quickly erode.

TAFE as anchor of COVID recovery

As the economy staggers in the face of the COVID-19 pandemic and resulting global recession, we need expanded access to VET education, stronger pathways from training to work, and a more cohesive and coordinated post-school education system. Revitalised TAFE institutes, as the most reliable ‘anchors’ of vocational training, must be at the centre of that reconstruction process.

After the Second World War, Australia launched a coordinated national training strategy, as a key part of a National Reconstruction Plan aimed at ensuring returning soldiers would have productive employment opportunities – and making sure the economy did not slip back into a stubborn depression. We need a similarly comprehensive national strategy for skills and training today, starting with the urgent restoration of public funds to the most experienced, reliable and high-quality, national-level, vocational training provider in Australia: the TAFE system.

Our findings demonstrate that there is strong economic rationale for strengthening and expanding VET access for young, at-risk groups, and for all workers who lack post-school qualifications. Australia will squander the demonstrated and ongoing economic benefits generated by our investments in TAFE institutes, and unduly limit our post-COVID reconstruction opportunities, if we do not act quickly to reinstate the funding and critical role that TAFE plays in Australia’s society and economy.

The fully referenced report ‘An Investment in Productivity and Inclusion: The Economic and Social Benefits of the TAFE System’ by Alison Pennington, Centre for Future Work at the Australia Institute can be found at https://www.futurework.org.au/.

By Alison Pennington, Senior economist, Centre for Future Work at the Australia Institute

This articles was origionally published in The Australian TAFE Teacher, Spring 2020 11 November 2020