How four year olds can make or break an economy 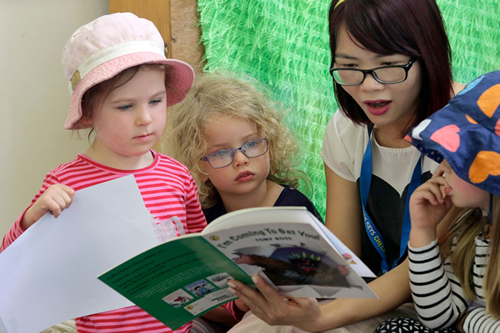 If the question is how best to lift our ailing economy out of a sickly slump, the answer could be early childhood education.

Investing in the early years of a child’s life through free preschool for three and four year olds doesn’t just make a difference to educational outcomes, it offers a return on investment that is virtually unequalled in a depressed economy.

The report, A Smart Investment for a Smarter Australia, concluded that spending on early childhood education could be viewed as “a strong long-term investment with quantifiable financial returns”.

It found that governments continue to win in the long-term by providing early childhood education.

“They benefit from higher taxes paid by parents and carers who are able to work more, and children who earn more over their lifetimes,” the report says.

“Early childhood education also reduces unemployment and the resulting payments of unemployment benefits and other forms of social expenditure.

“State and territory governments are beneficiaries as a result of fewer children repeating a year of school or needing special education placements, as well
as lower health and criminal justice systems costs.”

The benefits of spending on education are “incredible and multi-dimensional”, says Jim Stanford, director of the Centre for Future Work at The Australia Institute.

To start with, there is an immediate economic boost by employing more people.

“The Australian system is ridiculous compared to the rest of the industrialised world; full-day education for three and four year olds at the public expense is how it should be. That would create 100,000 or more jobs in the early childhood education system,” says Stanford.

“That would help to get the ball rolling to repair our labour market after the pandemic.”

“Australian women, particularly in the prime parenting years, have labour force participation far below other industrial countries. It is precisely because we don’t have an adequate early childhood education system,” says Stanford.

“The job losses for women in this recession have been significantly worse than for men because of the sectors they tend to work in; those were the sectors that were shut down.”

Extensive research, which is widely accepted worldwide, has proven that a child’s early years are critical to their development, says Professor Deborah Brennan from the University of New South Wales.

Brennan, a co-author of a 2018 report on the most effective interventions in early childhood, says parents get it, but policy makers are behind the game.

“It’s not so much about children having very specific skills when they enter school. We’re really talking about sociability, familiarity with working alongside other children, listening to and respecting other opinions, cooperating, and really finding joy in learning.”

“I want to acknowledge that some of the states, notably Victoria, are really moving ahead with preschool for three year olds. Other states like NSW and the ACT have made some steps, but Victoria is the standout,” Brennan says.

More than 96 per cent of Australian children attend an early childhood education program in the year before school.

Fifteen hours per week, delivered by a qualified teacher, is provided to four year olds in a funding arrangement between the federal and state and territory governments known as the Universal Access National Partnership.

But the federal funding that has underpinned the partnership since 2013 has always been uncertain. A series of 12-month or two-year temporary funding agreements has led to damaging disruption in the sector.

“It’s not the secure and permanent funding we need,” she says.

A review commissioned by the Council of Australian Governments (COAG) Education Council agrees, noting that short-term agreements and performance-based payments had “compromised” the ability to plan and invest for the long term, and had had a “debilitating” effect on the sector.

“This means, for example, good staff cannot be retained due to an inability to promise them longer-term employment, which in turn leads to higher turnover and associated administrative inefficiencies,” says Menz.

To remedy that, a review by international management consultancy, the Nous Group, has recommended that the next agreement run for five years – from 2021 to 2025 – followed
by a permanent national agreement from 2026.

Federal funding should continue, the review recommends, because of the strong evidence that quality preschool improves educational and other developmental outcomes.

“A decrease in funding would reduce preschool participation and could adversely affect workforce participation. There would be serious consequences for children, parents, the sector and its workforce, and other government programs,” says Menz.

In an ideal world, all children would receive at least two years of free preschool education, delivered by qualified early childhood educators, she says.

“While it shouldn’t necessarily be compulsory, it should be written into legislation that every child has the right."

Souce: A Smart Investment for a Smarter Australia, PwC

This Article was originally published in The Australian Educator, Spring 2020