Making our words and actions meet 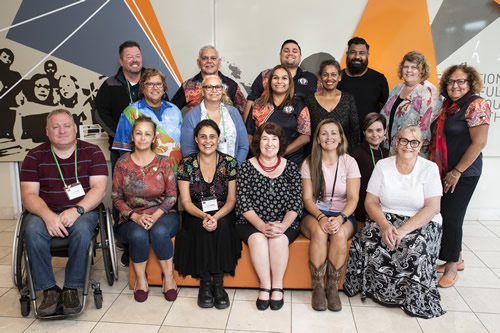 Merv King is telling me about the first time he attended a Queensland Teachers’ Union training meeting for Aboriginal and Torres Strait Islander members, held at the end of 2018 at the union’s Milton office in Brisbane. “I walked in to the room,” says Merv, “and I thought, I’m here with mob. I’m here with family.” It was a great feeling, he says. “But then I felt embarrassed for feeling like I was the only First Nations employee with union values in my workplace for so long. All my working life I’ve gotten used to being the one of a very few.”

Merv is a Waanyi man from the Gulf of Carpentaria. He was “born and bred” in the western Queensland mining town of Mt Isa and now works as an electrical trade’s teacher at Bundaberg TAFE in Queensland. As we talk, he describes feelings of professional and cultural isolation in the workplace that are all-too familiar to many Aboriginal and Torres Strait Islander teachers. But he’s also describing the relief that comes from finding mob – the (statistically speaking) few other Aboriginal and Torres Strait Islander teachers and workers in the education and training industry.

A recent national survey of Aboriginal and Torres Strait Islander AEU members on their perceptions and experiences of racism in the workplace confirms what Merv is saying.

The survey finds that there is a lack of employer-provided collegial and professional support for Aboriginal and Torres Strait Islander teachers across the public education system nationally. Indeed, in many states and territories, it is the AEU and its Branches and Associated Bodies are leading the sector – being one of the only organisations in the education industry to regularly bring together groups of Aboriginal and Torres Strait Islander teachers, principals and education support professionals for professional and collegial discussions.

Three hundred and ninety-nine or sixteen percent of the AEU’s Aboriginal and Torres Strait Islander members responded to the survey which set out to gather evidence on how Aboriginal and Torres Strait Islander public education workers in Australia perceive and experience racism in their workplaces and across the system more broadly. The survey was structured in to categories in order to gauge members’ perceptions and experiences of the extent to which racism manifests in the following inter-related workplace contexts and situations:

In a round-about way, it was lack of systemic commitment to Aboriginal and Torres Strait Islander training programs in the privatised mining training and employment industry that led Merv to TAFE and the union in the first place. Merv started his career at NORQEB (now Ergon) as an electrical apprentice in 1983. From there, he worked in the mining industry as an electrician. First as a FIFO worker in hard rock, copper, silver and zinc mines and then as a shift electrician in the underground coal industry in Central Queensland. An incident on a mine site led to a real-life evacuation, which put an end to his work in underground mining. Soon he found himself in the Pilbara, working as a plant electrician for the Rio Tinto mining company, which led to a training job at the Tom Price mine.

“I recognised that the young Traditional Owners were not being treated fairly,” Merv tells me. “When the mine was advertising for apprenticeships, there were no applications from young local Aboriginal people.” So Merv contacted management and raised concerns about the mine’s application process, including the requirement for applications to be submitted through the internet when most local Aboriginal kids had no internet access. “I asked the company, ‘how can I help?’” says Merv. “I wanted to show these young kids it is possible to work in the mining industry. Our kids are just as capable. We can be equally successful as long as we have opportunity, education and ambition.” He began working with the local school and helping with the homework club. “It was my way of helping and assisting young people in the Pilbara,” he says.

At that stage, Merv tells me, he felt like the company was completely committed to the work he was doing – training young, local Aboriginal people for work in the mine. Over time, Merv’s role in the organisation expanded, as his work became known across the company. He was training other trainers and developing training programs for high voltage electricity. He was flying all over the country and even went to the London Olympics. But despite this success, in 2014 when the price of iron-ore dropped, Merv was made redundant.

“I was awakened to the training industry’s vulnerabilities to the economic system,” says Merv. “It is all driven by the economics. Currently the rate of funding decline in the TAFE sector provided by both state and federal governments’ is resulting in a deficit of thousands of trained and qualified tradespersons nationally. ”

Merv’s statement reflects the general fragility of past systemic commitments from both private and public sectors to Aboriginal and Torres Strait Islander people and the plethora of broken promises that these commitments have come to represent.

The findings of the AEU survey of Aboriginal and Torres Strait Islander members concurs. Whilst there are a range of policy commitments to Aboriginal and Torres Strait Islander people and programs within the public education system at any given time, implementation is not systemically embedded. Rather, implementation of Aboriginal and Torres Strait Islander education and training policy is largely reliant on circumstance, individual personalities, certain locations and the individual commitment of those in paid leadership/managerial positions. And as Merv says – the almighty dollar. Following his redundancy, Merv moved to Bundaberg to be closer to his parents. He got a job teaching electrical apprenticeships at Bundarberg TAFE, joined the union, got active, and here we are today.

Making our words and actions meet

The union is national and organised and being heard, says Merv. “Since becoming a member, I have had the opportunity to convey my opinions and concerns on how we can improve employment conditions for Aboriginal and Torres Strait Islander workers in education. For all workers in education. And results can occur. Through the unions, it really can occur.” A recent example of this happened during the early days of the COVID19 pandemic. Realising that there was very little government policy on vulnerable worker status, Merv expressed his concerns to union organisers at the state and federal level. The Union’s leadership responded by raising these concerns at the highest levels of government and the problem was resolved quickly.

Through the union, Merv tells me, he’s seen that results can happen.