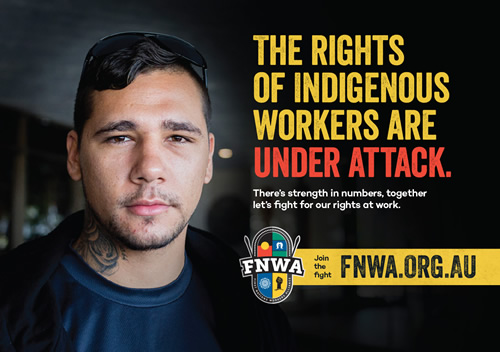 A small glimmer of hope presented itself in what was otherwise a featureless federal budget for First Nations peoples when it was delivered by the federal treasurer in May. Eschewing any flashy public announcements, the new cost measure sat neatly and quietly on the budget pages. Four short words titled - New Remote Jobs Program – now encompasses the federal government’s new commitment to overhauling the harsh and punitive Community Development Program (CDP).

However, whilst Watson has welcomed the changes, she is also cautious. “We know there are many journeys we need to take together,” she says, “and our Wage Justice campaign isn't finished.”

The FNWA is taking a firm stance to ensure that the CDP is not replaced with another ‘remote jobs program.’ Key to this is ensuring “investment in sustainable, permanent employment, jobs on country and delivery of apprenticeships & traineeships that lead to employment,” says Watson. In addition, the FNWA will focus on ensuring that, “the replacement doesn’t cause harm to First Nations CDP workers and impact negatively on communities as a whole.”

The FNWA will monitor the federal government’s promised process of co-design as described in the federal budget papers. “We are vigilant,” says Watson. “Government plans to pilot a new program at the end of this year. It gives us a sense that there is something already waiting when very little consultation and co-design has happened. We will see.”

The FNWA is also firm on the view that any co-design process should be with the communities that will be forced into another employment program, not with Indigenous people chosen by government. “We saw with the old Community Development Employment Program (CDEP) that communities had the capacity to manage and administer their own employment programs which were more successful than the current CDP.”

Active engagement has been critical to the campaign’s success to date. As Watson says, “This reform was not delivered because government 'listened'. It’s because of the tireless work of CDP workers, people in remote communities, unions, their members and the First Nations Workers Alliance have put in over almost 4 years.”

A quintessential activist and campaigner, Watson is back on the road with the FNWA in early June to kick-start the next phase of the remote community campaign in Barunga. “We will be talking to people and letting them know about the changes to the mutual obligations conditions for CDP workers,” says Watson. “It is now voluntary and people will not be breached for not showing up.” The FNWA will also discuss future plans for employment in remote communities. “We want to know what people want to replace CDP with and what jobs are needed in communities.” And there are also plans to celebrate the wins achieved by the four year Wage Justice campaign. “We won because CDP workers campaigned and voted to end CDP. We will celebrate that win with workers and communities and not pat government of the back for so-called ‘listening to communities’,” says Watson.

“In the meantime, we need support,” says Watson. “We need union members now to show we aren't going anywhere while CDP workers need a voice. Strength in numbers count.”