Sharing a love of language 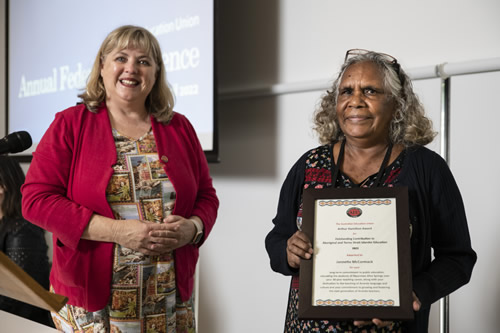 The challenge and reward of teaching a reluctant student was realised for Aboriginal educator Jannette McCormack when one of her more difficult charges chose to become an educator.

“He used to play around a lot and be silly in class, but I’ve got him interested now and he’s reflecting on himself. He’s in Year 11 and he’s evolving and learning, but he’s good at language and his mother is an interpreter so I think he will do well.

“I really wanted to see a young man step up and become a teacher; our young men have been through so much,” she says.

“Jannette McCormack is a long-serving AEU member who is committed to ensuring that all Aboriginal and Torres Strait Islander students have the right to high-quality education throughout their lives,” says Haythorpe.

Arthur Hamilton was a proud Palawa man, educator and union activist who advocated for Aboriginal and Torres Strait Islander students to be given access to high-quality public education. The annual award recognises his contribution by celebrating the successes of educators who have followed in his footsteps.

McCormack’s most recent contribution is the development of an innovative language pathway for Central Australian Aboriginal secondary students with linguist Dr David Moore. She heads the Arrernte Secondary Project at Alice Springs Language Centre, teaching students the local Arrernte language and other local dialects and supporting them to apply for language-based work after completing Year 12.

The program has helped students to become more engaged with school, increased attendance rates and offered diverse opportunities for her students to incorporate their own language in further study and employment.

Language Centre principal Susan Moore says McCormack supports Arrernte students to contribute to and participant in their own and broader society. Her work is giving students the confidence to enter into language workplaces after schools.

“Jannette has spent her career committed to ensuring that all Aboriginal students have access to a publicly funded education system. She communicates with Aboriginal families to give extra support for improving student attendance at schools,” Moore says.

Moore met McCormack when they attended a South Australian boarding school and says the friendship sparked her own interest in Aboriginal languages.

“She’s a very strong Aboriginal language speaker and she knows the significance and pride of knowing who you are, and that it is a crucial part of identity and culture. She knows how important it is in young people’s lives as they try to establish their identity.

“Jannette has always valued education and knows that it can be life-changing for young people. We work with a lot of students who come from generational poverty or families that have never been in the workforce.

“The language centre organises a lot of workplace visits, to places where strong First Nations people are working and using their language and culture skills to help other people. And we find that is quite inspiring for young people.

“Everyone recognises that Jannette is a great role model for First Nation students, but she realises that is important for them to have other good role models, too.”

Moore says McCormack has helped local language speaking students to feel proud of their identity, language and culture by supporting them to achieve the Certificate II and III in Applied Language in Arrernte or their own language and to complete Stage 2 Australian Languages.

“In 2020 she taught 10 students who completed the Second Language Learner Pathway in Stage 2. This was the first time this pathway had been taught in Australian Languages and Jannette helped to develop the resources to allow the course to be taught.”

McCormack is a proud Arrernte woman who grew up in Alice Springs and says she knew from her first years in college that she wanted to be a teacher.

“I grew up on a cattle station called Hamilton Downs, west of Alice Springs; I lived there with my parents in the 1960s and 70s. I went to Alice Springs and stayed at a Lutheran mission when I was in primary school,” says McCormack.

“My family used to stay in a trailer park and for holidays we used to go back to the bush and the station.”

“I did my first stint with students as a teacher’s assistant and I found that, when the students came and started speaking language, it was helpful that I could speak with them about things. I guess it all just came from there, and that’s what made me want to be a teacher,” McCormack says.

McCormack began her career at Yiparinya School in Alice Springs and says she is proud of the way that pathways have opened up for Aboriginal students.

“Over the years, I’ve found Aboriginal students are natural language learners because they grow up learning to speak both their mother tongue and English. And multicultural students in our primary schools, who grow up in a household with more than one language, pick up Arrernte quickly. Sometimes it’s harder for students who only speak English to learn Arrernte, but we are proud when they try,” she says.

McCormack has supported three school-based trainees to become Arrernte educators and they now work in Alice Springs schools. She has also supported a Pertame student (Southern Arrernte) to begin working as a Pertame apprentice at Batchelor Institute of Indigenous Tertiary Education. Her student received a merit A+ in Australian Language in 2020.

She is a mother of three and a grandmother of six and says her Elders have inspired her while English language teachers have mentored her and encouraged her to pursue the Arrernte language pathway she has followed.

“Jannette has also supported the development of the Arrernte bush garden next to the Language Centre,” says Moore. “This garden allows students to learn about bush foods and medicines in real life and to be able to see, taste, smell and care for the plants.

“Students and their families often have to travel great distances to see and learn about some of the endangered plants. When they are in the garden they can reflect on their culture while they are learning Arrernte literacy by reading the names of the plants. It’s also a wonderful chance for them to gain cultural knowledge from Elders when they visit the garden,” Moore says.

This article was originally published in the Australian Educator, Winter 2022