A COVID election? Bring it on! 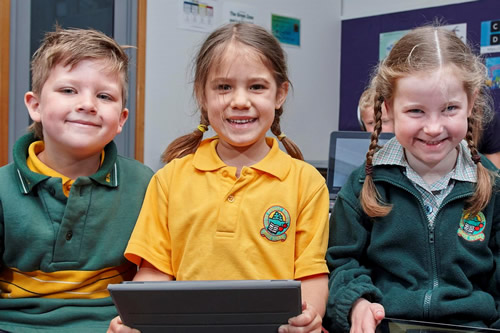 By the time you read this, Prime Minister Scott Morrison may have fired the starting gun on the campaign, hoping for a COVID bounce as the nation opens up after a long year. The election must be held by the end of May 2022.

But the outcome of this election will determine so much more than who gets to bask in the glow of a lifted lockdown. It will see Australia choose between a public school system that grapples with chronic underfunding and a widening gap between the haves and have-nots; and a system that really does meet the needs of “every school, every child”.

The return of a Morrison government will mean that the children who graduate from Australia's public schools in 2029 will leave having never had their education funded at the level that the Commonwealth and states say they should.

As AEU members know only too well, this is not an abstruse argument about numbers and percentages. It is about the future of every child who steps through the doors of a public school, from Darwin to Hobart, from Geraldton to Brunswick Heads.

That is why the AEU has, for the past year, been collecting the testimonies of members about the impact of underfunding on their schools and their students, and what they could do with the money everyone agrees is needed.

Our members’ stories – your stories – tell the truth about the impact of resource shortages. Together with seat-by-seat information about the impact of Federal Liberal and National government underfunding on schools in every state and territory, these stories are part of the AEU’s campaign to put on the record what the stakes really are at this election.

“The Morrison Government has failed to understand that their decisions on funding are not just about numbers. They have a real impact on students, their families and communities,” says AEU federal president Correna Haythorpe.

“We have looming teacher shortages. We have crippling workloads. We have infrastructure issues that mean in many instances, our students are denied the state-of-the-art facilities they need and deserve.”

If Prime Minister Morrison is hoping to run a feel-good election campaign based on his handling of the pandemic, he is in for a rude awakening.

Throughout 2021, Australian Educator has highlighted how schools and their students have been let down by the federal government during the COVID-19 crisis.

The pandemic has further exposed the deep inequalities in our education system and the shocking lack of resources, planning and support for students and teachers who have had to pivot time and time again.

Remote learning and the growing levels of anxiety and insecurity as the pandemic drags on have seen some students become disengaged or fall behind – often those who were already disadvantaged.

Many urgently need intensive and ongoing learning and support that can only be provided by the Commonwealth immediately lifting funding for all schools to the full Schooling Resource Standard (SRS).

The pandemic also exposed a chronic shortage of mental health support. Tamara Cavenett, president of the Australian Psychological Society says the nation didn’t have the capacity to cope before the 2019–20 bushfires and the pandemic hit. “Services have been operating beyond demand for some time”.

And while teachers have switched from classroom to remote learning and back again, they have rarely been treated as frontline workers, or given early access to vaccinations. AEU surveys of teacher workload show members working up to 12 hours a week more than the already long hours they worked before the pandemic.

The digital divide has been a significant gap revealed by the pandemic. There is a shortage of IT equipment and internet access in the homes of Australia’s most disadvantaged students and their families, and the need for skills, knowledge and confidence to use digital learning effectively.

Even before the pandemic, some four million Australians had only mobile phone internet access and one-quarter of Aboriginal and Torres Strait Islander students had no internet access at home, according to a report commissioned by the AEU from researcher Barbara Preston.

Keeping these students engaged and learning has required so much more than loaning them laptops and handing out dongles with internet access – although schools have done both of these things. “[Digital ability] takes resources and time to develop, and [without it] there cannot be successful, digitally based learning away from school,” Preston says. Now, as we enter a new “living with COVID” era, it is important that we make schools safe for students and the adults working in them.

The AEU is calling for a national school recovery plan to be developed by federal, state and territory governments in consultation with the union.

The plan should ensure the capital investment necessary for the safe running of schools including ventilation audits, air-quality testing, air purifiers, masks and sanitation as well as any required building modifications.

It must also provide the recurrent funding required for the delivery of urgently needed intensive learning and support programs for students. This will require the Commonwealth immediately providing the funding to achieve 100 per cent SRS funding for all public schools with the states and territories progressively providing their full investment.

Canberra has so far failed to rise to the challenge.

It is against that background that AEU members will put the truth of our unequal, unbalanced education system – a system where there is a funding ceiling for public schools but a funding floor for Catholic and independent schools.

They will be armed with leaflets tailored to every electorate in Australia, profiling the public schools in each seat and the benefits they would gain if they were fully funded.

This message includes the number of students from disadvantaged households, non-English speaking backgrounds, and Indigenous communities in each electorate – all factors that should attract extra funding under the SRS system.

Crucially, it also puts a dollar figure on how much schools in each electorate would benefit for every student if they are funded to 100 per cent of the SRS, and just how many extra teachers that could provide.

It also compares the capital investment public and private schools in the electorate have received for buildings, maintenance and equipment.

AEU members know exactly how that money could be spent, because they know what their students are missing out on right now.

“Our class sizes are getting larger, the number of students in the classes with some sort of neurodivergence is increasing and the supports available to those students are decreasing,” one Tasmanian teacher wrote in her submission to the Every School Every Child website.

Her students had less time with teaching assistants and there were no specialists in the school. “To really close the gap, we need to be able to offer regular psych, speech, OT and other supports.”

Students in her electorate each miss out on $1289 a year– enough for five extra teachers per school, which would cut class sizes by four. “It’s not fair that private schools can offer classes of 14 with teaching assistants due to their extra funding and we struggle with large sizes and no help.”

Lisa, a Year 1 teacher in regional Tasmania, says the minister is talking rubbish.

She says Tudge’s message is that “if teachers just understood teaching literacy better, then students would all learn better”.

“But a lot of the time, there are undiagnosed issues. We have such poor psychological support – unless the student has high level issues, they don’t get diagnosed and assessed properly.”

Lisa says students who have issues with working memory or dyslexia have an obvious need of support. “If you have the opportunity to work one-to-one with that child, for a small amount of time each day, you see that they can actually progress really well. They just need that extra support that other children don’t require.

“If I think about one child I was teaching last year, it really didn’t matter how skilled the teacher was. What that child needed was one-to-one support, because their learning needs were so high that in a group context they couldn’t attend and learn at the rate they needed to.

“Once upon a time we had programs like Reading Recovery that went to every child to address that. Now it just seems to be teacher-bashing.”

Retired teacher Jacqui, says children with literacy difficulties are in a Catch-22. “Current diagnostic criteria include the requirement that students have already accessed at least six months’ targeted intervention. [But] without a diagnosis, students are unable to access targeted funding for ongoing intervention.”

Peter, a teacher in Braddon in the ACT, writes: “Money doesn’t automatically equal success, but it means a greater chance of success. We need more early intervention to help those kids who arrive in early childhood behind their peers because of lack of exposure to books. All kids need to be reading well by Year 3 or they struggle to keep up for the rest of their schooling.”

As for capital works, AEU members describe working in “temporary” buildings that are now decades old, leaking roofs, cramped staff rooms and libraries converted to classrooms because of lack of space. And not a swimming pool or polo pitch in sight.

Correna Haythorpe sums up: “We need smaller class sizes, literacy and numeracy support for every child who needs it, more individual attention for students, in modern and COVID-appropriate facilities.”

If this is a COVID recovery election, then the onus must be on the political parties to set out the part our education system will play in that, and how they intend to make it happen. It will require a planned combination of recurrent and capital funding – and not one-off catch-up funding to tide schools over. They need 100 per cent SRS funding, and they need it now.

“Right now, more than ever, we require a nation of people with the knowledge skills and expertise to come out of this pandemic and ensure our children succeed,” Haythorpe says. “That’s universal. It shouldn’t be determined by the wealth or background of their families, and it shouldn’t be constrained by the spending decisions of our governments.

Where has the money gone?

Remember the GFC and Kevin Rudd's Building the Education Revolution? During the 2007–09 recession, it stimulated the economy by building new school facilities. It was pilloried by the then-Opposition as a rort, wasting money on buildings that supposedly weren't needed.

Now in power, that same Liberal-National Coalition is spending billions of dollars extra on schools that already receive more than the benchmark set for education funding in Australia – schools that teach less than 15 per cent of students with additional needs.

Ministers proudly trumpet record spending, but the truth is that government funding per student, adjusted for inflation, has risen four times faster for private schools than for public schools and there is no federal plan to fully fund the schools that teach 85 per cent of children from disadvantaged backgrounds – the students from Indigenous or LOTE backgrounds, in remote communities or living with disability or in poverty who most need and benefit from targeted funding.

The Gonski funding reforms begun by the Gillard government in 2010 but finalised and implemented by the Coalition since 2013, were supposed to address inequality, ensuring all schools had the funding needed to cater for every child.

The Schooling Resource Standard, weighted for disadvantage, set for the first time the minimum funding schools require to ensure at least 80 per cent of students achieve NAPLAN standards.

Yet under the agreements the Commonwealth struck with states, every Catholic and independent school will reach its SRS by 2023, while 99 per cent of public schools will be below the SRS.by 2023. Meanwhile the federal government has thrown billions of extra dollars into the private sector outside of these agreements to cover teething pains.

This article was originally published in The Australian Educator, Summer 2021